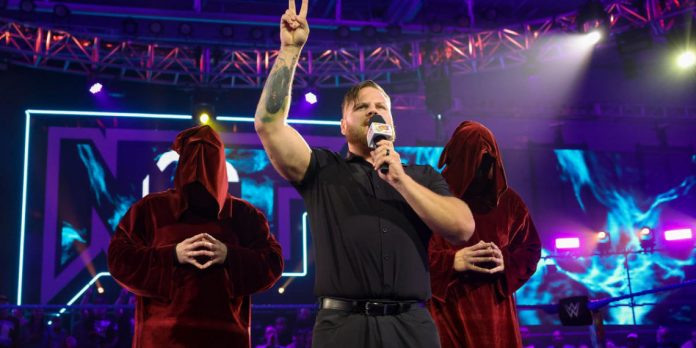 WWE NXT Superstar Joe Gacy recently spoke with Mike Johnson of PWInsider about how he feels his current character is an integral part of who he is.

Since the NXT 2.0 relaunch, Gacy, the leader of the mysterious disciples known as The Dyad, has generated controversy. He was questioned about the most crucial element in developing the character’s role as a spiritual leader, as well as about the research he did to develop the character, the advice he received, and the process of developing the right formula to debut the character.

The Dyad is likely to be revealed by Gacy soon. The Diamond Mine was defeated by Gacy and The Dyad on this week’s episode of NXT 2.0 (Roderick Strong, NXT Tag Team Champions).

“Well, I’ll be honest, I feel like it’s kind of just been inside of me. I don’t know if it’s so much research or you know, whatever you might call it. I just have never had this kind of platform to be able to express it. You know, other places I’ve been, it’s always been kind of like, whoever you are, you have to introduce yourself completely immediately. But being here in NXT, you know, with WWE, you get the opportunity every week to show a little bit more of yourself. And I never had a platform like that.

“So for me, this has been great to be able to do the things I’m doing and having a platform like this to do it. It was new to me and it was a little intimidating at first but having it week after week after week, being able to show a little bit more and more and more, it’s been very rewarding for me. So as far as, you know, research or anything like that or advice,I get advice here and there from coaches, producers, but a lot of this is just kind of been, you know, me getting the opportunity to express myself.”

The Dyad is likely to be revealed by Gacy soon. Due to conflict within the group, Gacy and The Dyad defeated The Diamond Mine (Roderick Strong, the NXT Tag Team Champions The Creed Brothers) on this week’s episode of NXT 2.0.