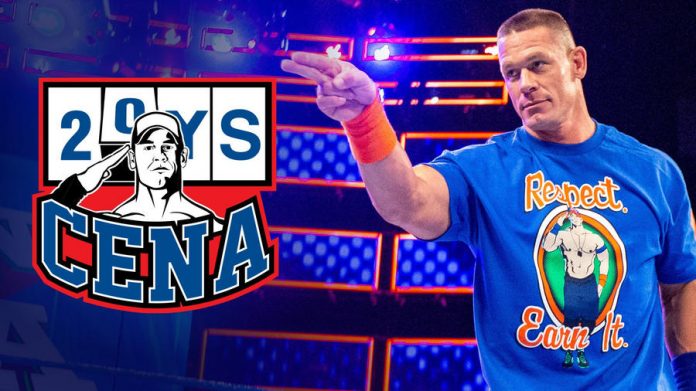 On Monday, June 27th, WWE celebrated the 20th Anniversary of John Cena in the WWE. Making his debut on a taped edition of Smackdown back in 2002 against Kurt Angle, not a person watching that night could have ever dreamt that some kid from West Newbury, Massachusetts, would ever become the face of a generation, the face of the largest wrestling company in the world, and one of the GOATs in every sense of the term. Today let’s take a look back at the career of John Cena, one that propelled him beyond WWE and into the wonderful world of Hollywood.

The night Cena debuted on the main roster of WWE TV was one during a period of significant change in the company. He was one of the fresh faces brought in after the inaugural WWE draft to fill out rosters and get a chance to graduate from developmental. He coined the exact phrase Mr. McMahon used in a recent and soon-to-be-famous promo, saying he had ruthless aggression: the slogan for the era that was about to begin. Cena didn’t win that night, but he got to shake hands with the Undertaker when it was all said and done. That truly is something special for a kid making their main roster debut, regardless of how things went in the ring.

It wasn’t all smooth sailing for John after this, though, as the remainder of 2002 was slowly sinking into forgetfulness and nothingness, and he was in line to be cut in the Fall 2002 series of cuts after a European tour. However, the wrestling gods must have been shining on Cena that night, as Stephanie McMahon heard him rapping while the roster traveled on a tour bus. Once she heard it, she wanted him to turn that into a character and bring it to TV. Thus, the Dr. of Thuganomics was born!

Cena finally used this new character to find his way over with the fans. Even though as a heel, Cena now had a proper place on Smackdown and would see his stock rise, along with his placement on the card. He went from Velocity to TV weekly, to major PPV matches with the likes of Brock Lesnar and the Undertaker post-Wrestlemania 19, Cena was on his way. Soon, the fans started to love this persona more and more, and by the end of 2003, Cena was a roaring babyface headed to Wrestlemania 20 to battle Big Show for the United States Championship. Cena would go over in the Garden that night, winning the title (the first of his main roster career and the first of 5 reigns as U.S. Champion in his career). His 2004 saw him continue to impress and grow both as a character and in the ring. Matches with Booker T and Carlito highlighted the year, culminating in 3 reigns as United States Champion between Wrestlemanias 20 and 21. By the time WWE went to Hollywood for the granddaddy of them all in 2005, it was Cena’s time to ascend to the mountaintop finally. Defeating JBL in one of the main events, Cena immediately etched his name in the history books by becoming WWE Champion (the first of 16 World Championship runs in his career).

Cena’s first reign as champion lasted all the way until January of 2006, when Edge cashed in Money in the Bank (the first-ever cash-in) to win the title after Cena retained in the Elimination Chamber. That reign saw some big feuds with the likes of JBL, Chris Jericho (ending Jericho’s first WWE run in the process), Kurt Angle, and including being drafted to Raw in the 2005 WWE Draft. The fans, however, turned on Cena during this time. His 5 Moves of Doom were called out, and the infamous split of “Let’s go, Cena, Cena Sucks!” chants started that year, never to go away again.

Edge and Cena battled for much of 2006 over the title, with Rob Van Dam and Triple H thrown in for a short while. Cena jumped to 3 total reigns by year’s end, main evented his first Wrestlemania, and embarked on a 380-day reign with the title starting in September that was only ended due to a torn pectoral muscle in October of 2007. Speaking of 2007, Cena put in one heck of a shift for the first 10 months of the year, main eventing Mania for the 2nd year in a row in an instant classic with Shawn Michaels, proving a lot of his doubters wrong in the process. He also won the tag titles with HBK in the early part of the year, carrying the titles into Wrestlemania as he battled his partner that night. Cena also battled a wide array of new challenges, including Umaga, The Great Khali, Sabu, Mick Foley, Bobby Lashley, and Randy Orton. Orton was slated to end the reign before the injury did prematurely.

Cena’s 2008 Royal Rumble return after this injury is arguably the best Royal Rumble surprise ever, the best Rumble returns ever, and even the best return ever, period. Nobody expected Cena, and MSG went wild when he arrived and won his first of two Rumbles. 2008, Cena tried to win the title back but failed several times, and then had some upper mid-card feuds with JBL and Batista, winning the tag titles with the latter for a cup of coffee. A neck injury derailed Cena in late summer, but another fast return saw him win the World Heavyweight Championship for the first time from Chris Jericho in November. Cena feuded with Y2J, again with JBL, and then with Edge and Big Show for the first half of 2009, bumping his total number of world title reigns to 5. He then feuded with Randy Orton in the fall in a long and brutal feud where the pair traded the WWE Title multiple times. He added 2 more world title reigns by year’s end but lost it to Sheamus in December. He regained the title in February 2010 but failed to hold it longer than 5 minutes as Batista came out to screw him over.

Cena and Batista feuded into the spring, with Cena regaining the title again in March at Wrestlemania, now totaling 9 overall in just 5 years. After he dropped the title in June, Cena feuded with the Nexus for the entirety of the second half of the year in one of the most infamously badly booked feuds of all time. The Nexus was buried, in many respects, both literally and figuratively, by Cena. He won the WWE Tag Titles in a fever dream of a team with David Otunga. He soon returned to main event status in early 2011 as he main evented Wrestlemania again with The Miz, falling to the Awesome one but setting up a collision course with The Rock for the next 2 Wrestlemania main events. Cena was on the losing end of the Summer of Punk in 2011, although he did add 3 more WWE Title reigns to his resume between May and September, bumping him to 12 in total. He also had one final reign as a tag team champion with the Miz thrown in there somewhere, yet another confusing time. Cena had one bizarre storyline with Kane in early 2012 where Kane wanted him to “embrace the hate,” where Cena made out with Eve Torres and also got Zack Ryder inches from death just about every week.

Cena competed in one of the biggest matches ever at Wrestlemania 28 against the Rock, where they tore the house down. 2012 was not a banner year for Cena, and although he defeated Brock Lesnar at Extreme Rules and won the Money in the Bank Ladder Match, he got beaten several times by CM Punk, and was the first-ever to fail to cash in the briefcase successfully, and was injured down the stretch. Returning to form in 2013, he won his second Royal Rumble and soon his 13th World title from the Rock in their Wrestlemania 29 rematch. Cena feuded with Ryback and Mark Henry before dropping the title to Daniel Bryan at Summerslam in a classic match before he had surgery to repair an injury. Returning in October, he defeated Alberto Del Rio to become World Heavyweight Champion, his 14th World Title. After losing another feud to Randy Orton, Cena embarked on a long feud with Bray Wyatt where Bray should have won, but didn’t, in another very confusing booking decision. Cena won his 15th World Title at Money in the Bank but only held it for a couple of months before Brock Lesnar destroyed him for the gold at Summerslam. Cena feuded with the Authority in the fall, before transitioning back to the U.S. Title in 2015, having 2 reigns in the year and instituting a series of open challenges that would become legendary. He had amazing matches with the likes of Rusev, Cesaro, Dean Ambrose, Stardust, Wade Barrett, Kevin Owens, Sami Zayn, and Seth Rollins. A real who’s who of talent for sure. After this, Cena began to transition to life away from WWE.

Hollywood started calling, and little by little, we saw less of Cena in a WWE ring and more of him on the big screen. Remaining a part-timer between 2016-2018, Cena had his legendary feud with AJ Styles during this time, won his record-tying 16th World Championship, and got to face the Undertaker at Wrestlemania. He started working with the younger talent and put many guys over in big spots. Guys like Styles, Kevin Owens, Roman Reigns, and Seth Rollins saw their stock rise with big wins over Cena. Now, Cena has limited the amount he has appeared for WWE. He appeared as the Dr. of Thuganomics one more time at Wrestlemania 35, faced the Fiend in the Firefly Funhouse Match at Wrestlemania 36, battled Roman Reigns at Summerslam 2021, and seems poised to battle Theory this year at Summerslam as well. Although it now seems more likely to see Cena in a “Fast and Furious” movie than the squared circle, it’s always a treat to see Cena come home. On Raw Monday night, Cena came home, and, at least at that moment, all seemed right with the world. If this trip down memory lane has taught us anything, it is this: John Cena will go down as one of, if not the greatest of all time, having earned that distinction through being the top guy for so long, doing everything there is to do, beating everyone there is to beat, and reaching GOAT status all through three simple words…hustle, loyalty, and respect!