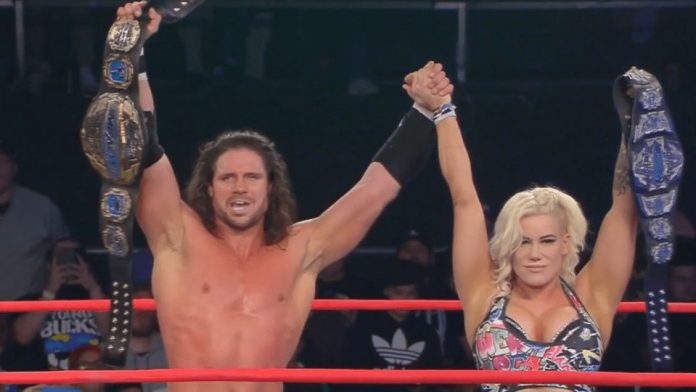 John Morrison took to Instagram this afternoon and congratulated his wife, Taya Valkyrie, on signing with WWE. As noted earlier today, WWE announced the largest Performance Center Class in history, with 10 female recruits and 8 male recruits. You can click here for the full announcement with details on each talent. One of the female recruits is Valkyrie, the longest-reigning Impact Knockouts Champion ever.

Morrison posted a photo of Taya wearing her WWE Performance Center t-shirt and congratulated her. “Congratulations to @thetayavalkyrie on signing her first @WWE contract!!!,” he wrote.

Taya then posted a lengthy statement to Twitter this evening, tagging Morrison and Triple H in the post. The former AAA Reina de Reinas Champion said she’s hungrier than she’s ever been and ready to work

“[folded hands emoji] For those that have been on this decade long journey with me, you know how badly I have wanted this,” she wrote. “I’ve sacrificed and dedicated my life to this. Moved across continents, learned languages, immersed myself in new styles, cultures and experiences with the over all goal of making it one day to the @wwe. I have worked my butt off and today my dream has come true. I promise to work harder than I ever have, to show the world who I am as a performer and human being. I love my life and take absolutely nothing for granted. I’m hungrier than I have ever been and now the work begins. Thank you to all those that have supported me, and to those that don’t like me…welp, too bad [shrugs emoji] I know my worth, my talent and I will always strive to be better. Now buckle up because this is going to get interesting. LETS GET TO WORK!!”

😭 It’s official. La WERA LOCA has arrived to @WWENXT!!! This is a dream come true for me….now the work begins 🙏🏻 @WWE https://t.co/W10AvsUqCK