Below is the updated line-up for tomorrow’s Dynamite episode on TNT:

* Orange Cassidy vs. 10 of The Dark Order

* Britt Baker will be in action 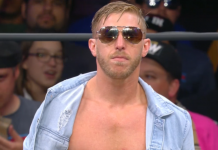