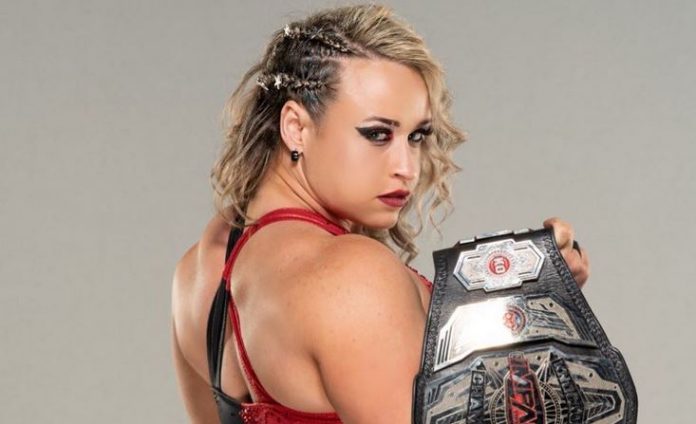 How she’s preparing for her title defense against Mia Yim at Emergence:

“Basically treating it as though it’s any other match. I go into every match I have with everything I have. I’ve been training, just like I normally would. I’ve been doing more cardio lately, because I know that Mia is very fast. So I think I’m gonna have to duck some kicks. But yeah, that’s the main thing is just up in the cardio a little bit. Training normally, lifting as much as I can, as often as I can. And yeah, just kind of giving it everything I have.”

On being the first ever IMPACT Digital Media champion:

“Well, I think that the being the first of any kind of champion is a really big deal because it kind of sets the stage for how the championship is going to go. And I think it’s good that IMPACT introduced that title because I know that digital media, and like YouTube and social platforms, they’re huge. And Matt Cardona was you know, he invented the internet championship. And that was, I think, really before all this social media stuff kind of blew up. And now I think is the perfect time. So I’m not 100% sure why they didn’t call it the internet championship. To be honest, I think Cardona actually might have like…a trademark or something to it, but it’s basically the the internet championship. And I think it’s good because you can basically have these really fun fast paced matches with that title. And they’re just super exciting. And people have very short attention spans nowadays, you have noticed, but you put those up on YouTube, and that generates impact. It impacts a lot of income. And I think it gets a lot of eyes on the product too.”

Whether she’ll ever go for the IMPACT world title:

“Well, currently, I am focused on making the Knockouts division as as good as it ever can be. But definitely…I tell people this all the time, one of my main goals in wrestling and before I leave IMPACT would be to just be the first person to hold all the titles in the company. That’s that’s one of my big life goals.”

How she wants to win every title, including the IMPACT tag, and names Josh Alexander as her partner:

“Yeah, I think that me and Josh has talked about this quite a bit. Josh Alexander, we talked about how between the two of us we’ve actually held every single title that IMPACT has had, so I think that’d be a very menacing tag team if we ever tagged together.”