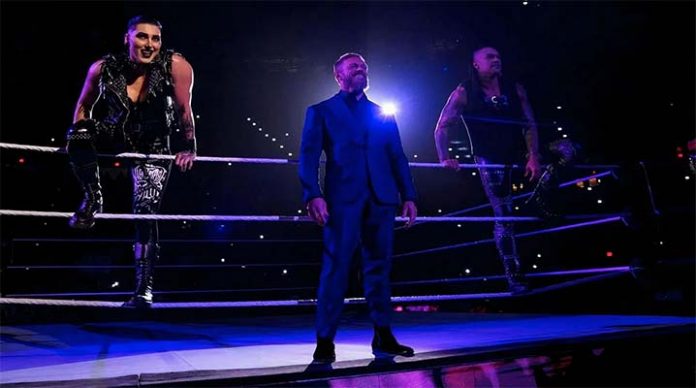 On the road to WrestleMania 38, Edge turned heel for the first time since his return to WWE in 2020. When he did, the possibilities became endless as to what he could do next. The rumors swirled about him starting his own heel stable, and the possibilities became endless again. Damian Priest was the first to join him at the showcase of the immortals, and then Rhea Ripley followed suit at WrestleMania: Backlash. They are still recruiting for more membership (with rumors of Ciampa joining the group next firmly at the head of discussions for the team), and the sky seems the limit for the newest WWE faction.

Now, the trio is on a tear across Raw, but they have a formidable opposition. The three current members of Judgement Day have had ongoing issues with 3 individuals who have banded together in the name of fighting some common enemies. AJ Styles, Finn Balor, and Liv Morgan have come together (in a way that was “too sweet,” as one may call it) last night on Raw, and now everything seems to be lining up for a massive 6-person tag team showdown. How will that match go down? Where might it happen? What can they do to maximize the feud? I have some ideas!

So firstly, this match needs to continue the strong build it has had. Styles and Balor have been desperate to finally put an end to Edge and his nefarious ways, but have continued to come up short, as the Rated R Superstar and Damian Priest have foiled them at every turn. The addition of Rhea Ripley to the group saw the very fun addition of Liv Morgan to the former Bullet Club leaders as they stood center of the ring and threw up the “too sweet” hand gesture. Now there are likely to be several weeks of battles, brawls, and preparation ahead of what should be a massive blow-off match to these extended feuds that have been weaved into one massive one. That brings us to June 5th.

June 5th will be WWE’s next premium live event, entitled Hell in a Cell. Ask anyone who knows me and knows what I prefer about this often-overused WWE match stipulation, and you will know I am the biggest proponent of only putting matches inside the cell that 100% warrant this stipulation as to the end all-be all of the feud itself. The end of months of battles and wars, the final payoff to a true blood feud. Think of some really great examples of this being the case: Undertaker vs. Triple H, Triple H vs. Cactus Jack, Triple H vs. Batista, Seth Rollins vs. Edge, and what will be Seth Rollins vs. Cody Rhodes on June 5th, as also announced on Raw this week. In the earliest days, and with some bits and pieces of a throwback in recent times, this match stipulation meant way more than the gimmick name of a monthly WWE super card. It is very unfortunate that this stipulation has fallen so far from grace because of some negatives, and I really hope WWE can pull things together to fix it. Did we really need to see Seth Rollins vs. Kevin Owens in the Cell in 2016? No, we did not. How about Roman Reigns and Bray Wyatt in 2015? I forgot that match even happened until doing research for this article. The truth of the matter is that these matches could’ve been outside the cell entirely and been no different than they were inside it. The worst case of this of all is the absolute train wreck of a 2019 match between Seth Rollins and “The Fiend,” which to this day I find the most annoying travesty in WWE history, and I’ll stand on that box and yell at that cloud all day.

So anyway, back to the task at hand: Judgement Day vs. Styles, Balor, and Morgan. I think by now, you can see that I want these 6 superstars to compete inside the cell this year. It just makes the most sense. Also, with an established cell veteran like Edge in there to guide the 5 more inexperienced and/or younger stars to a classic match. It would be absolute chaos and a car wreck, but in the best possible way. It would be entertaining, the spots they can surely come up with would be some of the most unique in the stipulation’s history, and it would also be the first-ever mixed tag team cell match, and we know how much WWE loves their first time ever stipulations. These are 6 of the most talented in WWE, and they can surely pull this off.

Now, one may say, why not another, more traditional match inside the cell rather than a mixed tag match. My answer is simple: no other match warrants it. As I stated, I am not a fan at all of WWE just throwing two superstars into the cell because it’s the show’s namesake. There is no need, and it lessens the importance of the Cell in other instances. Do we need Asuka and Bianca Belair in there? No, we do not. We don’t even know who Ronda Rousey will face (especially after last night’s drama with Naomi and Sasha Banks). It seems unlikely that we will have Roman Reigns for this show in any capacity. Plus, with WWE loving to do 2-3 cell matches on this show every year, this match is the exact one I want to be the 2nd of the two, joining Rhodes & Rollins III.

Will we get this match inside the cell? Only time will tell, but the biggest and most important thing these 6 get is a proper match with length and time to showcase what they can do while also ensuring the best possible outcome for them going forward so that both the winners and losers of the eventual match look better coming out than they did going in.