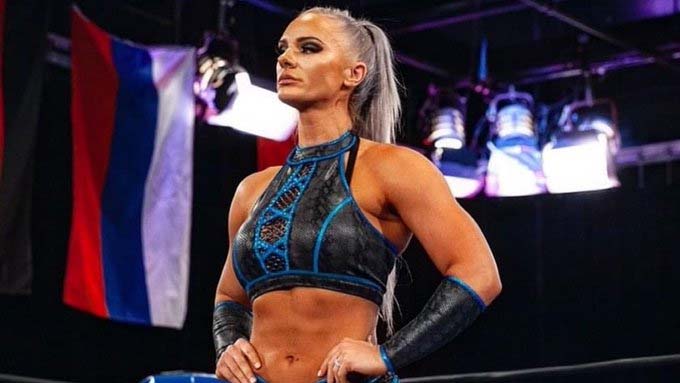 As noted, Kamille recently spoke with Andrew Thompson of POST Wrestling for an interview.

During the one-on-one discussion, the women’s wrestling star spoke about how she would have liked NWA EmPowerrr to be an annual all-women’s special event, as well as how she hopes to stay with NWA.

Featured below are some of the additional highlights from the interview where she covers these subjects.

On she would have liked for EmPowerrr to be an annual event, liked that crowd more than NWA 73 crowd: “So I do think that it would be something nice to do a once a year type of thing, an EmPowerrr event just because it was such a great turnout last year. I performed both nights and I actually enjoyed the crowd on the first night more. I thought they were even more into it. So, it is something I would like to see but, Mickie James, it was basically her event, she was a huge part of it and I know now that she’s back in kind of the swing of things and she has a lot going on so I mean, that plays a part in it to it not happening this year… because it was her baby, you know what I mean? So, it’s something I would definitely love to see in the future for sure.”

On hoping to stay with NWA, can see herself there in the long-term, wants to help out behind the scenes once her in-ring career is over: “So, I love working for the NWA. I love my bosses, I love my co-workers. It’s just a really great atmosphere especially when it comes to professional wrestling. The reason I quit a long time ago, even on the indies is because it can be a very toxic place and some pretty bad people involved and that’s something I just truly stand behind the NWA is that the locker room is great, the office is great and at the end of the day, I hope to stay with the NWA and right now, it’s my career and I make a good career doing it and as long as I can stay happy, healthy and make a living doing it, I’m in it for the long haul and when I’m done in-ring, I would still love to be involved in the company, helping the women’s division in any way I can. Something I take pride on is the way I put my matches together and I think that’s something that I can help a lot of girls with so that’s something I would definitely be interested in doing in the future as well.”

(H/T to POST Wrestling for transcribing the above quotes.)