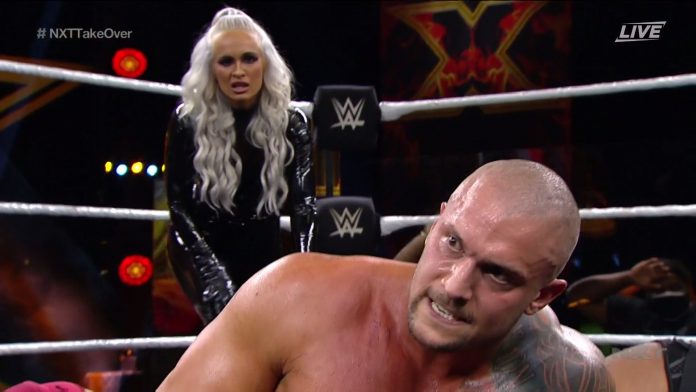 Karrion Kross recently spoke with Ryan Satin of FOX Sports to promote tonight’s WWE NXT episode on the USA Network, where Kross will face NXT Cruiserweight Champion Santos Escobar in a non-title No DQ match. This has been Kross’ first major feud since returning from the shoulder injury that forced him to relinquish the NXT Title last August, right after winning it. Kross was asked if it’s frustrating for him to have still not received another NXT Title shot since returning from the injury. Kross said he is not frustrated over the lack of a title shot since being back because timing is everything.

“No,” Kross responded. “Not necessarily, because I believe—I guess pun intended—timing is everything. Timing is everything and I believe that there’s a right time and a right place to do things. I see, literally, every single day online, fans have been asking for me to go after the belt. They want me to officially take it back. And, again, it’s always very flattering to just see that interest and to see that people want me to get back on that road so we can see where that was going to lead. I have every single intention to do that, but they’re going to appreciate when I decide to do it more than just doing it immediately and I’ll leave it at that.”

Current NXT Champion Finn Balor is the first to hold the title since Kross was forced to relinquish last year, defeating Adam Cole to win the vacant strap at Super Tuesday II in September. Kross said Balor is absolutely a worthy champion to hold the belt after he had to drop it, and said he looks forward to stepping in the ring to compete with Balor. He was asked about NXT possibly being featured on WrestleMania 37 Night One or Night Two, and if he would like to have his NXT Title rematch happen on The Grandest Stage of Them All.

“100%. Yes, I would,” Kross responded. “I don’t know where that began – whether it was online or if it was Finn’s suggestion through another interview – but people have been creating these pictures where they post the both of us with the WrestleMania background for weeks now. I hope the company is listening to that because there seems to be an interest and a demand for that. So, I hope fans get what they’re looking for, because I’d be more than happy to step up on ‘The Grandest Stage of Them All’ and do that.”

Kross and veteran WWE Superstar Randy Orton made headlines earlier this month when Orton posted a late night tweet to challenge Kross to a match. Kross accepted the next morning, saying the idea of the match sounded good to him. Kross was asked what he thought of Orton’s tweet.

“I laughed about it because I had woke up that morning, did cardio, came back, and then I turned my phone on and that was the first thing I saw on social media,” Kross said. “My first, immediate reaction, because I saw what time it was tweeted, I was like, ‘What?!? What is this?’ It was very late in the morning. I was like, ‘I clearly missed a very good time last night.’ But, yeah, it was very flattering and I thought it was awesome, and I think the world of him. I’d even said this before, I think more people should be having fun on social media rather than keeping it like this overly serious, overly sensitive battle ground. I don’t know him personally, but I do know that the guy has a sense of humor. I’ve been aware of that for a time and as flattering as it was, I know he’s only kidding around. But, I can’t wait to work with him in the future. I’m definitely interested in doing that. In order for him to hit the RKO, he’s going to have to give me his back, and a lot of bad things can happen. Just thought I’d throw that out there for peace of mind.”