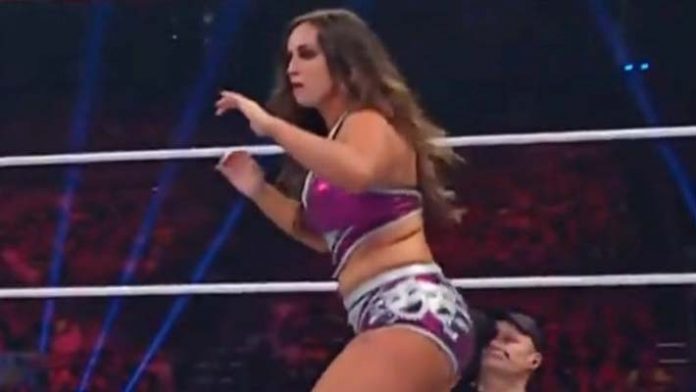 In an exclusive interview with PWMania.com, Scott Mitchell (@ScottsScoop44) sits down with Katie Arquette to talk about her background, working on WWE and AEW on the same night, what’s next, and more.

Who is The “Queen of the Silver Screen”

Katie Arquette got into wrestling when she was young. “I’d watch it with my older sister around the time of the attitude era,” Arquette tells PWMania. “I thought it was really neat and I would try to make sense of it. I asked one too many questions and my sister kicked me out of her room.”

Arquette fell out of wrestling for a little while. “In college, I met up with a group of friends who watched it and saw a lot of similar faces from back when I watched it in the Attitude Era, like Kane,” says Arquette. “I started falling in love with it again. It led me down the grapevine through some mutual friends, finding a school, deciding to try out and train with.”

Kane was one of Arquette’s all-time favorite wrestlers. “His look, his size, the way he performed in the ring, and just his overall story,” were all things that drew Arquette to the big, red, machine. “When I got back into it, and I saw he was still wrestling, that’s what inspired me,” states Arquette.

This made Arquette realize that professional wrestling wasn’t just a hobby, it was a career path. Growing up, Arquette was also a big fan of Lita. “The way she dressed, acted, and her entire persona I just fell in love with,” says Arquette. “At IWC, last year I had a cage match with Zoey Skye. For the finishing move, I decided to do a chokeslam off the top rope for Kane and a moonsault for Lita.”

Her match with Zoey Skye was one of her two favorite matches. Her other favorite match was against Britt Baker for the IWC Women’s Title back in November of 2018 at IWC: Winner Takes All. “Baker and I had a match, that’s when David Arquette would make an appearance,” says Arquette. “That was the night I won the title and David gave me the fur coat he brought for me in the middle of the ring.”

But, there was another reason Arquette loved her match with Baker. February 25th, 2017 was the day Arquette would have her first singles match, and it was against none other than Britt Baker at IWC. Baker would go on to defeat Arquette and retain her IWC Women’s Championship on that day.

In the match Baker and Arquette had in 2018, it was “the first time when I went up against Britt and I felt more ready than my first match,” exclaims Arquette. “It felt good to have her see how much I grew since the last time I faced her.”

Working on AEW and RAW on the Same Night

On Monday, August 24, 2022, Arquette would pull double duty. She wrestled on AEW: Dark where she took on Serena Deeb. “It’s always a good time when I’m backstage for AEW,” says Arquette. “Being invited back is amazing. I get another opportunity to showcase what I have to offer.”

When Arquette found out she would be working with Serena Deeb again, she thought to herself that this was her second chance. “This was my chance to get a little more offense in and prove myself,” states Arquette. “I did too. I was able to show a little more strength and put more offense in on her.” 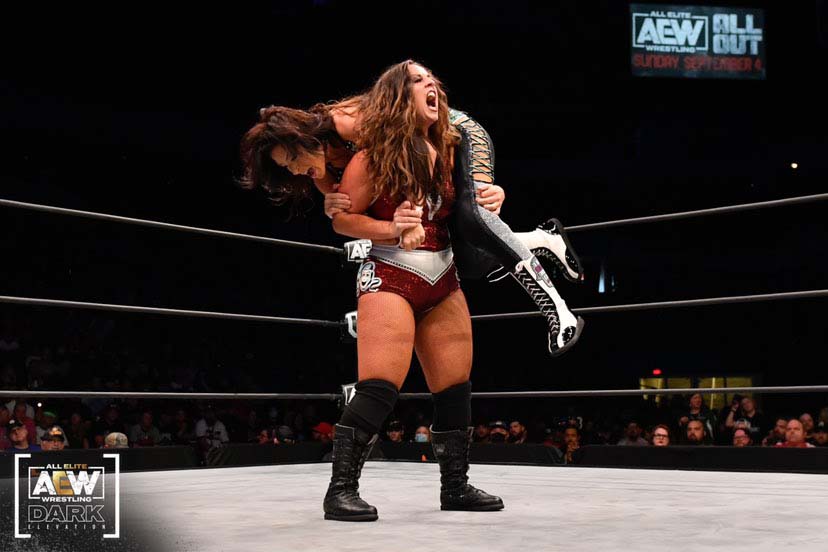 Arquette enjoys working with Serena Deeb a lot. “She’s great,” says Arquette. “She’s a legend and she knows what she’s doing. She has a ton of experience behind her as well. This time around got to showcase more that I had to offer against women’s wrestlers like her.”

Wrestling in AEW this time around had some subtle differences for Arquette. “This has been my fourth time back there, two of the other three times I wrestled against Jade and Serena. Those two times were very nerve-wracking. It put me in a position to keep my cool and show my worth,” says Arquette. “This time was different for me. It’s a bigger stage, there are more people involved, but it’s just another ring. It’s somewhere I know that I’m comfortable and it’s where I know I can excel. I felt more confident and more like myself. I went in there with more confidence and I think it showed this time.”

Almost two hours later, Katie Arquette would find herself standing against the ring from three of the best women that WWE has to offer in Alexa Bliss, Asuka, and the RAW Women’s Champion, Bianca Belair. “It was surreal,” says Arquette. “The chance I got to even have a match live on RAW, then finding out who the opponents were, it was very surreal. I was blessed to get the opportunity.”

What made the night even better for Arquette is she got to have the match side-by-side with two of her former opponents, Kayla Sparks, and Dani Mo. “It felt good going in with both of them to this match,” states Arquette. “Two people I’m familiar with and comfortable with.”

When Arquette found out who she would be facing, three letters went through her head, OMG. “When we found out we were going up against Alexa Bliss, Asuka, and the RAW Women’s Champion Bianca Belair, it was an incredible moment. It was a challenge, for sure. These were three women’s wrestlers who I’ve watched for quite some time now and three women’s wrestlers who I’d love to face one-on-one. The fact that I got a little bit of each of them was incredible. I hope to one day get another opportunity there, and who knows, maybe it will be me going after that RAW Women’s Championship.”

The match she had on RAW was one that she will soon never forget. “From what I learned from AEW this time around, feeling more confident with myself in any ring regardless of where it is,” says Arquette. “It helped going into Raw. This is something that I’ve done before, and I could do it again.”

When Arquette found out that both of her appearances would be on the same night, so many emotions ran through her head. “I couldn’t believe I got another chance to showcase myself with AEW, AND the fact that WWE wanted to see what I could do and put me in a position to prove myself, it was just a surreal moment,” says Arquette. “People may not have known my name, but they may know my name now. That’s all I can ask for, just seeing where I could go, and any opportunity I can take advantage of.”

What’s Next for Katie Arquette?

“At the point I’m in my wrestling career, I’d love an opportunity anywhere,” says Arquette. “This year, my main goal was quality, not quantity. I wanted to put all my effort into something that meant something to people, and that can lead me somewhere so I can get more experience.”

Seeing all the hype with Impact and NWA, these are two places that Katie Arquette would love to have the opportunity to go have matches at. “They have incredible women’s wrestlers there and I’d love an opportunity to showcase myself there.”

Recently, Arquette also had a match at CCW. CCW is a wrestling promotion in Delaware that features an all-female roster. “Having an opportunity to be in a locker room with all these amazing wrestlers, can lead to something more. Seeing all the people who are getting amazing opportunities, like KiLynn King and Willow, I’d still love an opportunity with Chelsea Green. There’s a lot of open-ended situations that could happen and I’d love to see where this latest opportunity will get me by the end of the year.”

If you want to support Katie Arquette, check out her Pro Wrestling Tees store and you can follow her at: