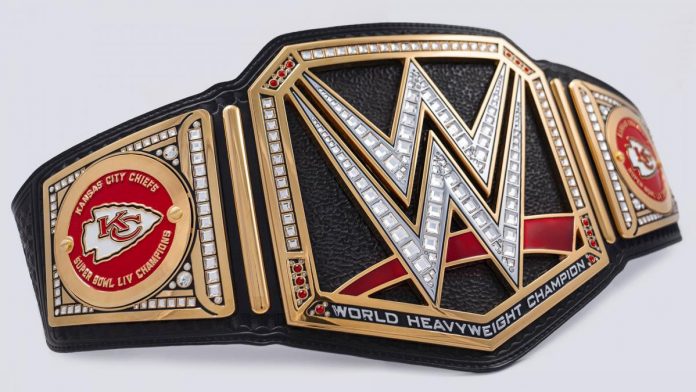 – As noted on Monday, Triple H took to Twitter to reveal that WWE was sending a custom WWE Title to the NFL’s Kansas City Chiefs for their big Super Bowl LIV win on Sunday night. That title belt made it to the team in time for tomorrow’s victory parade as WWE tweeted this photo of Chiefs quarterback Patrick Mahomes, who was the Super Bowl MVP this year, holding the title. You can see the full photo below, along with Triple H’s original tweet from Monday and a new tweet from the Chiefs:

The custom #WWETitle made it to the @Chiefs in time for tomorrow's parade. It looks good on you @PatrickMahomes! #ChiefsKingdom pic.twitter.com/kzcilKdQOa

For the first time in 50 years, the Kansas City @Chiefs can say they are #SuperBowl Champions again! Congratulations to Coach Andy Reid, MVP @PatrickMahomes, @tkelce, and the entire organization. Bring this title back to the #ChiefsKingdom to celebrate! pic.twitter.com/hF3jtR1WCB

The belt made it in time for tomorrow 🏆 pic.twitter.com/bIR5aXIVV9

– The Street Profits did not appear on last night’s WWE RAW because Angelo Dawkins was not there. Dawkins’ Instagram account indicates that he is on vacation with his pregnant wife. As seen below, WWE released a post-show video of Montez Ford backstage at RAW, mentioning how Dawkins was going to make the show after being in Costa Rica over the weekend. They did an angle where Dawkins sent a cardboard cut-out to Ford, and said he will be back next week. R-Truth walked in the room and was confused by the fake Dawkins.

– WWE stock was back up 2.78% today, closing at $47.36 per share after opening at $46.61 today. Today’s high was $47.50 and the low was $46.40. This is the first increase since the stock tanked last Friday when WWE announced the departures of Co-Presidents George Barrios & Michelle Wilson, which brought a loss of $1 billion in market value to the company. Stock is currently down 0.021% in after-hours trading at $47.35 per share.