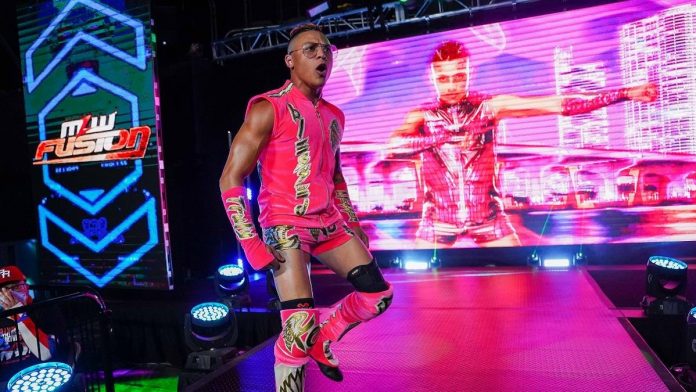 Coming up to one of the biggest MLW shows of the year, Battle Riot, KC Navarro sits down with Scott Mitchell of PWMania.com to speak about his career in MLW to this point, his second ever Battle Riot match, and more.

KC Navarro made his debut in the 41-Man Battle Riot match in 2021. Navarro has been making a name for himself worldwide, and it was time for MLW to find out who he is. “I remember when I got contacted, it was very unexpected,” says Navarro. “I had a lot of things going on in my career. I was wrestling for the top places in the world and just creating a lot of buzz for myself.”

MLW would ask Navarro to take part in their upcoming Battle Riot match. Navarro immediately said yes. MLW, Major League Wrestling, is one of the bigger promotions in the United States. It is also one place that Navarro has never worked for before. “They asked me if I had any interest in debuting in the Battle Riot,” states Navarro. “I was nervous for that match. I knew a lot of the guys who were going to be in it, a lot of top guys. It was an honor to share the ring with them and work with them.”

In the MLW Battle Riot match, they featured a lot of the top stars around today, including some legends. “I remember having an awesome reaction from the fans,” says Navarro. “They were excited and very happy to see me there.” When Battle Riot 2021 was over, Navarro was offered a deal, which he liked a lot.

“I’m excited about the future,” states Navarro. “I wanted to build with a company that’s also building to get bigger, like I was, as well.” When Navarro found out he was going to be in the Battle Riot match, he was a little bit nervous. He knew there would be a ton of stars in that match and there would be a lot of entrances, and a lot of guys who were going to do very cool things.

“I felt blessed when I made my out to the ring that night to a standing ovation,” says Navarro. Navarro ended up making it to the final five in that match. “This year, I hope to last longer, and this time I’m more prepared for the Battle Riot. I’m more ready for this year, for sure.”

Shortly after his debut, Navarro took place in a 12-Man Survival Elimination Match with some of the best wrestlers MLW has to offer. He loved this experience. “Any experience for a young guy like me, to wrestle guys like Savio Vega, Blue Meanie, Zenshi, to be able to learn from them and get advice, it’s an honor and a privilege,” states Navarro. “That’s the best thing about MLW, how versatile the locker room is.”

Shortly after the 12-Man match, Navarro would have his first singles action with Warhorse. Navarro would end up picking up his first win in MLW in the match. Navarro was excited to have a one-on-one match because it gave him the chance to show what he was all about.

“Warhorse is a very interesting person,” says Navarro. “He’s wild, crazy, and his headbutts hurt like hell.” The coolest part about this night for Navarro wasn’t just him winning his first one-on-one match in MLW, but it was also the first time his mother and father saw him wrestle at the same time in person.

“That was a very cool moment for me,” says Navarro. “To be close to New Jersey, get the win in front of my mom and dad, that meant everything to me. Besides beating nZo, that was probably the coolest moment so far for me in MLW.”

KC Navarro recently got the chance to work with nZo on a storyline in MLW. This meant a lot to him in more ways than one. “Around the time I started hanging out with nZo, one of my mentors passed away, Shad Gaspard,” states Navarro. This was a rough time for Navarro.

“It hurt and I wasn’t okay because everything I did in my career was for Shad,” states Navarro. “I wasn’t able to call him when I got signed to MLW. It hurt.” Navarro talked about the time nZo called him around the time Shad passed and asked Navarro to train with him.

“Over the course of the pandemic, I would just train with nZo,” says Navarro. “This is a guy who is awesome to learn from. He made millions, was a former Cruiserweight Champion, and is just the best talker in the business. I’ve been told I’m one of the best upcoming talkers in the business, as well.”

Navarro says that learning from nZo was a great learning experience for him. “For MLW to take that story and put it on TV to tell such a story and get fans invested, people wanted to see me kick nZo’s butt.” When Navarro got the win over nZo finally he credits it as being one of the most satisfying moments in his career.

“In Dallas, for Mania week, I finally beat him,” states Navarro. “I know he was proud of me and everyone was proud of that moment. I hope this leads to bigger, and better moments.” Navarro credits Shad Gaspard as being a mentor to him.

“I remember first meeting Shad,” says Navarro. “I had a shoulder injury in 2016, it was a month before I wrestled Lio Rush. I cut a promo and he was there. I remember him coming to the back after that promo and telling me I was going to make it.” Gaspard would go on to follow Navarro on all of his socials and give him his number to keep in touch.

“He would make sure I stood focused and would keep my head on straight,” states Navarro. “A lot of guys didn’t want to see my win. At 16 for Shad to say I was going to make it, after being kicked out of wrestling school one year prior for not being humble enough, he was probably the best person I’ve met in my entire life.”

“Shad cared about his fans, family, and friends. He passed saving his son. For him to give up time to make sure I was motivated to get to the next level, I owe it all to him,” says Navarro. “Sometimes it hurts when I have a big moment and the first thing I want to do is call him, but I can’t. I always make sure to put it out on social media and say that it was for him. Without him, I don’t think I’d be where I’m at today. I was at a point where I just wanted to quit.”

Navarro recalls sharing a newly released promo picture of himself on his Twitter. Shad re-tweeted it and called him the future, and that lit a fire under Navarro. “If Shad didn’t do that, I always ask myself if I would be where I am right now. I’m grateful I got to know him. I’m grateful God put him in my life when he did. I know he’s watching over me and will be with me every step of the way.”

KC Navarro also credits Davey Richards for being a mentor to him. He always goes to Richards for advice. “When the pandemic was over and we were able to come back, I actually got to work with Davey in PPW,” says Navarro. “It was a fantastic match. It was on his second match back from his hiatus and he immediately knew I had it. He always guides me in the right direction.”

On the upcoming MLW show, Navarro challenged for the MLW World Middleweight Title in a triple threat match against Arez and MLW World Middleweight Champion, Myron Reed. This was awesome for Navarro. Navarro recalls that he and Myron go way back, and although coming up in different parts of the country, they both knew who each other were.

Navarro hopes that fans enjoy this match and enjoy everything they do. “I think Myron is underrated and a phenomenal talent,” says Navarro. “Hopefully, if MLW continues a storyline between us, it’ll be super interesting and super fun.”

Navarro says that the upcoming match is awesome and can’t wait for people to see it. “You had three different styles in that ring,” says Navarro. “Arez is such a different cat. He’s someone I can move with really well and he is always on the money.”

Looking ahead to this year’s Battle Riot, Navarro says he is focused and ready. “This is the most ready that I’ve ever been in my career,” says Navarro. “I’m on fire, I’m the guy right now and I’m confident in saying that.”

Navarro says that he knows the mistakes he made last year and is ready this year. He also credits New York City for having a crazy crowd, and being that it’s so close to New Jersey he has some home court advantage. “I’m ready for the crowd to fuel me and I’m ready to win this thing.”

What’s Next For KC Navarro in MLW

Plain and simple, KC Navarro wants the best. “They’re bringing in everyone with their open door policy,” says Navarro. “Bring me the best, I don’t fear anyone.” Navarro says he’ll take on Hammerstone, Fatu, Calvin Tankman, and EJ and that size doesn’t matter.

Navarro also would love to take on Davey Richards again and get a one-on-one match with Myron Reed. “I’ll take on anyone from around the world, any company, any time,” says Navarro. “I’m ready to be the best, and I think I’ve proven I am the best. Whether it’s the Middleweight or World Championship, I think that’s in the future for me.”