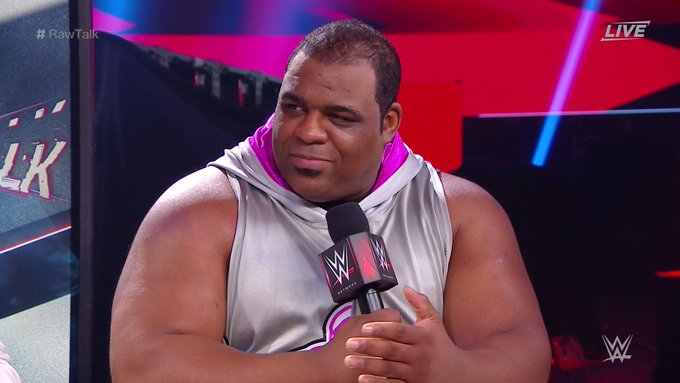 Keith Lee has decided to explain his absence from WWE TV after all. Lee was out of the ring and not included in the WWE RAW storylines from February until last week’s RAW, for unknown reasons. It was reported at one point that Lee was not medically cleared to compete, but no specifics were ever revealed. Lee had been telling his fans on Twitter that one day, when the time was right, he would tell his story. Lee then made his surprise return to WWE TV on last week’s RAW, losing to WWE Champion Bobby Lashley in a non-title match.

In an update, Lee took to Twitter before this week’s RAW hit the air and said he will tell his story in a week or two.

“I’ve decided. I am just going to tell you guys the story myself. Give me a week or two,” he wrote in a tweet that is now pinned to his account.

One fan responded and commented that it’s not our business, but they’ll listen if Lee wants to let everyone know. He responded, “I do. I wanted to do it in a special manner, but instead, I’ll just have to chat directly.”

For what it’s worth, R-Truth responded to Lee’s initial tweet from Monday afternoon and wrote, “I think you should dawg [thinking face emoji]…Get it off’yo chest [man shrugging emoji]”

After the tweets, Lee was back on RAW this week, taking a loss to WWE NXT Champion Karrion Kross. He has not commented on the loss as of this writing.

There’s no word yet on what Lee has planned for his fans, but we will keep you updated here on PWMania.com.

I do. I wanted to do it in a special manner, but instead, I'll just have to chat directly. https://t.co/I7nPtMBQnL

I've decided. I am just going to tell you guys the story myself. Give me a week or two.

I wanted to do something educational, but also inspiring to tell you guys about everything since late January. Seems that is off the table for now.

So….with that, I will find another way to tell guys about everything. It might simply a video of me chatting with you. We'll see.