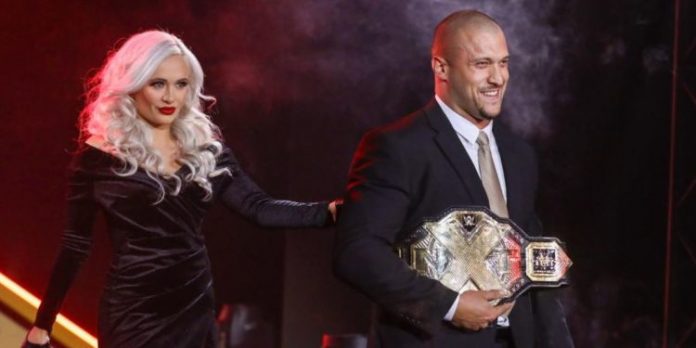 Killer Kross recently appeared as a guest on The Two Man Power Trip of Wrestling podcast for an in-depth interview covering all things pro wrestling.

During the discussion, the former NXT Champion spoke about a promo segment between himself and Adam Cole building up their title showdown at NXT In Your House 2021, and how he planned to say something that WWE officials ended up nixing.

Featured below is an excerpt from the interview where he touches on this topic with his thoughts and tells the full story.

“A few people have asked me about this over the last few months [promo segment with Adam Cole on NXT] and I always laugh because it’s partially our fault, the wrestlers, how much people get worked into stuff because it’s our job. It’s our job to make it feel as real as possible. I think it was Dewey Foley who wrote that promo, pretty sure it was Dewey. He wrote it — I mean, I got the promo the day before, 24 hours before. Sometimes you get ‘em two or three days before, sometimes before the day of. I remember that promo, I got it the night before and I remember reading it and I thought, at first, I was like, I guess the promo’s unfinished because sometimes you get unfinished stuff and they just let me say whatever I wanna say because they trust me, you know? So, when I got to work that day, they were like, ‘Oh yeah, it’s not finished’ and I was like, ‘Okay, cool. I have some stuff I’d like to say’ and it was basically my rebuttal was pretty much the opposite of what he had said to me, which was something of the nature like, ‘Well, you need guys like me to make these people believe in you because there’s 17 year old kids in the audience the same size as you that can beat the living sh*t out of you in a legitimate fight so, when you’re saying this company makes me feel special, I make these people believe in you because without me, there would be no Adam Cole. You’d be in line at Dunkin’ Donuts with everybody else,’ you know what I mean? And they were like, ‘… You can’t say that’ and I was like, ‘Well what the f*ck? Why not?’ And they were like, ‘Well, you know, he’s been doing favors for people. He put Keith over and then he went under in the Fatal 4’ and something’s wrong with his wrist or something. I don’t remember. He had hurt his wrist at the time or something and then he did the thing with Pat [McAfee] and they were like, ‘We need him in the Fatal 5-Way [at NXT TakeOver: In Your House] because we’re gonna lose you soon and we’d like you to go over clean on everybody so you have clean kills on everybody going up. So this promo’s really for him to look strong’ and I was like, ‘No problem,’ you know what I mean? I’m killing these guys in the ring, I’m undefeated, I have the belt. It’s TV, it’s fiction. It’s a script so I was like, ‘Let him go for it.’

Check out the complete interview at Apple.com. H/T to POST Wrestling for transcribing the above quotes.