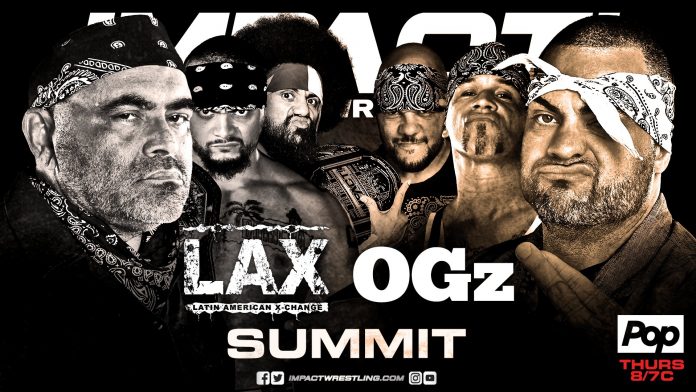 This Sunday, at the Melrose Ballroom in New York, Eddie Kingston and his LAX faction will step into the “Concrete Jungle Death Match” for Impact Wrestling’s Bound for Glory event live on pay-per-view.

However, long before this 16-year veteran of the genre was scheduled to appear on pay-per-view in New York, he called the Empire State more than the location of his next anticipated match-up, he called it home. Born in the Bronx and raised in Yonkers, with an Irish-Puerto Rican background, Eddie Moore always projected a sense of authenticity, even before he stepped into the ring ropes.

“There is no place like New York, I can’t explain it because New York becomes a part of you,” Eddie commented.

Despite a caring family, Eddie found the allure of the city drew him into a rough crowd during his youth, an aspect of his life that would later have a direct influence on his professional wrestling persona. Ironically, it was the action of the squared circle that allowed him to avoid some of the pitfalls of the streets, as ECW’s Hardcore TV at varying odd hours of the night prompted him to back home in time to watch performers like Tommy Dreamer, Terry Funk, and others that inspired him.

Throughout his teen years, the man that would become known as Kingston, became enthralled with the combination of physicality and athleticism that he saw on screen. Soon, he discovered the Japanese scene and was amazed with the stiff style of Giant Baba’s All Japan, another major influence on him.

Eddie wanted to be one of the strong style grapplers that left such a major impression on him so in 2002, he and longtime friend, Blackjack Marciano searched for a place to learn the craft. Eventually, they found themselves inside the ring at Mike Quackenbush’s Wrestle Factory, the training center of his Chikara promotion. Quackenbush’s project blended different styles into a unique formula for a comic book-inspired approach to professional wrestling. This element of the sport might’ve contrasted with Eddie’s gritty background, but a variety of trainers and the atmosphere of Chikara events allowed for the development of a solid skill set.

“Going to Chikara to be trained and then hitting IWA Mid-South where my name started to grow,” he explained as important steps in the evolution of his career.

In fact, during the years that followed his time at the Wrestle Factory, Kingston has worked for, and often times won championships for nearly every major independent organization in the United States, making him one of the well-known performers of the indy scene. From bouts on the west coast for Pro Wrestling Guerrilla to mid-west slug fest at IWA Mid-South to contests for Alpha-1 in Canada, these are just some of the extensive accomplishments on his resume.

But, New York will always be the most important place for him to compete.

A former iron worker and member of the 580 union, Eddie Moore brings a blue collar work ethic to any venture, and the audience can see the real-life passion for the industry that he brings to the ring. He verbalized his struggles and triumphs through various promos during the course of his career, making him as well-known for his ability on the mic as he is for his skills inside the ropes. As he spoke of in the past, Eddie has grappled with depression for most of his life, but the unique art form of sports entertainment provided solace for him.

“It does help and it is my therapy, it brings me peace,” Eddie said.

After various stints in Ring Of Honor and his extensive accomplishments on the independent circuit, Kingston signed a deal with Total Nonstop Action in late-2016 as a member of the DCC, a trio that saw him work with stellar talent, James Storm and Bram. A year later, during the rocky time for the company that was fueled with the well-publicized turmoil of the Dixie Carter regime, Kingston left the company.

By early 2018, Anthem Sports, the parent company of Canada’s Fight Network, rescued and officially renamed Impact Wrestling. A hidden gem of the business, Don Callis and talented veteran Scott D’Amore were named Executive Vice Presidents, an announcement that created a sense of optimism around the brand. Despite initially being lost of the shuffle of the regime during his DCC run, Kingston’s talent as a storyteller couldn’t be denied, and he resurfaced alongside one of his mentors, Homicide in April.

“LAX led to my return, and I’m having a blast bringing raw and rugged storytelling.”

As with any new venture, Impact Wrestling under the Anthem banner saw its share of peaks and valleys during the past year, but the common theme is that the company continues to make progress building itself as a national entity. For King, he and the original LAX combination, Homicide and Hernandez embarked on an intense rivalry with the talented pair of Ortiz and Santana, including a thrilling match at Slammiversary in July. Lucha legend, Konnan accompanied Ortiz and Santana, which prompted several confrontations with King in recent months.

As explained by play-by-play commentator, Josh Matthews in a video posted on social media, the stipulation of the first-ever “Concrete Jungle Death Match” will see the canvas taken away, exposing the wooden planks underneath the mat. All the turnbuckle pads will be taken as well so the steel that connects the ropes to the ring posts will be uncovered. The gritty environment of this match certainly suits the athletes scheduled to compete and the New York crowd that will be in attendance at the event.

The ring boards will be exposed, the turnbuckle covers removed – @realjoshmathews takes you through the brutal rules for THIS SUNDAY'S Concrete Jungle Death Match between the OGz and LAX. #BFGCOMDA pic.twitter.com/fy1iF45pM0

“It means the world to me and everyone in that match feels the same. New York raised us and will never leave us,” Eddie explained.

Eddie Moore has spent nearly half his life in the professional wrestling business, a path that saw him struggle and succeed. Perhaps, what made this charismatic brawler such an asset for many promotions during his decade and a half career is that much of the reality of Eddie Moore blends through the work of Eddie Kingston. King brings an unapologetic passion to the squared circle, and that dedication will give him the chance to compete in his hometown on pay-per-view.