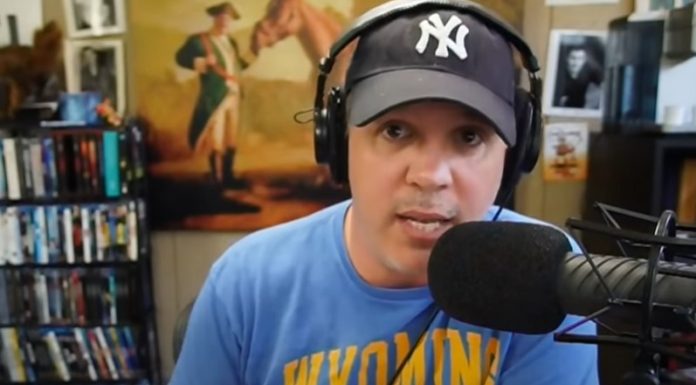 Former WWE writer Kristian Harloff recently took part in an exclusive interview with PWMania.com. Since his WWE days, Harloff has made a name for himself in multiple spaces including his “The Big Thing” podcast, where he has interviewed superstars such as CM Punk and Booker T. Harloff is also the creator of the new internet hit “Friday Night Titans,” which features a competition called the “Movie Trivia Schmoedown,” in which contestants engage in storylines based around a trivia game show. Here is the complete interview:

How did you come up with the idea for Movie Trivia Schmoedown?

Back in 2008, me and Mark Ellis started a YouTube channel called Schmoes Know and we reviewed movies, which no one did at the time. We developed a following. We then had a 2 hour live podcast in 2014 and since we were sports fans, we thought, “Let’s do something where the last segment of the show would be a championship trivia game. So we played it, it was a lot of fun and people loved it. Then, we did it again the next year and we got people from Rotten Tomatoes, Nerdist, etc. involved. In 2016, we made it weekly and I thought what if we took the theatrics of wrestling and combine it with movie trivia?

The difference between WWE and my show is that the Schmoedown results are completely legit. If someone wins who I didn’t think was going to then I have to make the next episode based on that win, which makes it exciting. It has that element of excitement to it where no one knows who is going to win and I like that environment anyway where I need to pivot based on what’s happening.

So, the trivia game itself is a shoot?

Since the actual trivia winners for Schmoedown are not predetermined, is there anyone who surprised you when they won?

Andrew Ghai for sure. He was and still is one of the biggest personalities we have but he wasn’t known for being the strongest trivia player. When he defeated Dan Murrell it was a real shock. The other one that I wasn’t expecting was when Kevin Smith played Jericho. Both surprised me tremendously. Kevin Smith wound up taking the victory in sudden death but Chris Jericho knows his movies. It was a really great battle to watch and they both surprise me for sure.

What excites you about wrestling?

What gets me most excited is when it feels like a sport; when it has that raw, unscripted feeling. I think people feel that has been lacking for a while in WWE.

It seems to be common in the wrestling community to talk negatively about WWE and say “It was better in X era or Y era.” Is there anything in current WWE that excites you?

Absolutely. I think overall that the promos and build-up to the matches are phenomenal. The build-up for Roman Reigns has been amazing when you look at where he was 5 years ago compared to now.

Another thing that makes WWE exciting is AEW. Cody Rhodes coming back was well done at WrestleMania. I think MJF will definitely be in WWE at some point. It’s great for wrestling fans to see these guys across different companies. And you never know, maybe Cody will one day be back in AEW. Same with MJF when he goes to WWE.

How did you land the gig in WWE as a writer?

I had a friend that knew someone that worked in the accounting department back in 2001 and she got us tickets to Wrestlemania 17. So, we flew out to Houston and we stayed at the same hotel as the wrestlers. One night we went to the bar where all the wrestlers were and I saw Paul Heyman. Everyone else was talking to the wrestlers, but nobody was talking to Paul Heyman, so I went up to him and asked him, “How do I become a writer?” He said, “write a letter.” I told him I had already written one and he said, “write another one.”

So, I kept sending letters until I heard back from them asking for a sample, which I sent. I came up with different Invasion angles and Stephanie wrote me back saying that they liked them and asked me to come in for an interview.

I interviewed in a room with Stephanie, Paul Heyman, Brian and Michael Hayes. Paul asked me, “If we weren’t going to offer you the job, what would you do?” I told them, “I would try to find a way to get the job.” And I got the job.

What was your experience as a WWE writer like? When you woke up in the morning and clocked in, what did your day look like?

It was pretty intense. I knew that when I was there I was pretty much going to be there for a short period of time. But I took in every moment. When I woke up, I clocked in early, met with the team and we were on the road. We would go to whatever venue the taping was at and we would meet beforehand. We were assigned different pieces in the writer’s room and then we just earned our spots.

My favorite Vince McMahon moment is a stupid one, just sitting on the plane with like seven or eight people with him offering me shrimp, I thought that was the coolest thing ever. But he did tell me some great stuff about how to take things that are going on in reality – in your reality – hiding them and making them a part of your story narrative.

What else did you learn from your time at WWE?

I was talking with Paul Heyman and he asked me to call a match. And I blew it. But Paul still said, “You should be calling matches, I have a good feeling about you.” And now here I am announcing competitors for the Schmoedown.

You’ve hosted CM Punk and Booker T on The Big Thing podcast. What were some of the most interesting things you learned from both guests?

I’ve had an opportunity to speak to CM Punk a few times now. He’s a massive horror movie fan. I love talking movies with the guy and I love just talking entertainment in general. He’s a real fan of it. I also like the relationship we established because after he was a guest on Collider Live with me, he told me afterwards the reason why he opened up was because I treated him like a person and wasn’t just trying to dig. I respected that about him and he just likes to shoot the sh**.

As far as Booker T, Booker has now become a friend. He became a fan of the Schmoedown and his co-host on ESPN Brad Gilmore reached out to me, Brad now hosts one of my shows on the MTS Network and Booker has been involved in many of our events. Booker is the definition of a stand-up human being. He is a constant professional and tells it as it is. One of my favorite people that I have met for sure.

We have our Free for All event this weekend for Friday Night Titans, which is basically the equivalent of the Royal Rumble, so make sure you tune into that.

Other than that, I’d say with the Schmoedown, the movie fan has met the wrestling fan. So if you enjoy wrestling, you’ll definitely love my show. Friday Night Titans is tailor-made for wrestling fans. And who knows, it could be you winning trivia and holding that championship one day!

Be sure to check out Kristian’s various works at the links below: