WWE Hall of Famer and Raw General Manager Kurt Angle recently spoke with The Wrestling Estate. During the interview, he shared some high praise for Braun Strowman:

“Braun is one of a kind. I actually told Braun this last week. If he stays healthy, he can be up there eventually, in years’ time, with Undertaker as one of the best big men in the business. You have to remember that this guy wasn’t an athlete-athlete. He was a Strongman competitor. It’s hard to believe that he’s as athletic and has the psychology like I’ve never seen a big man have since Undertaker. I give him a lot of credit for being able to pick up the business so quickly.” 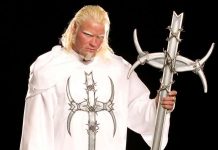