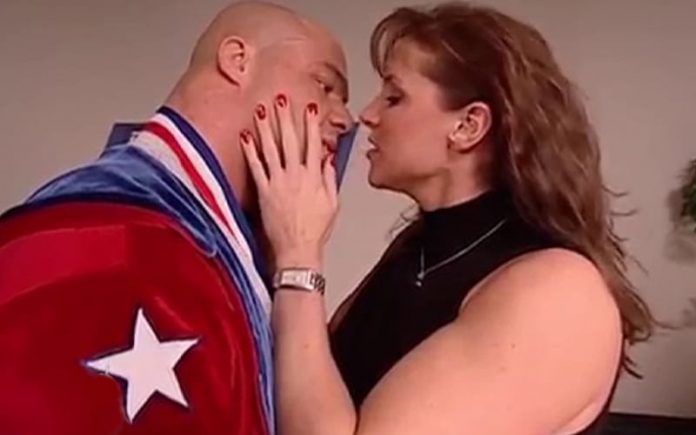 WWE Hall of Famer Kurt Angle paid tribute to his friend Vince McMahon in his most recent podcast. Angle also talked about the scene where he had to kiss Stephanie McMahon:

“It was weird. It was very uncomfortable. Vince, not only was he directing, he was literally two feet away from us. The camera was right here, Stephanie and I are here, and Vince is right behind the camera looking at us. I’m not saying he felt like he looked like he was aroused, but he had this look like, I want to see this. So I kissed Stephanie, and I do it like this because I’m nervous as hell. I look like a duck, fish lips. Stephanie afterward said, ‘You kiss like a fish.’ I said, ‘What the hell do you want me to do? Do you want me to slip you the tongue while your dad’s watching? Plus you’re married to Triple H.”

Angle also shared a story from a plane ride he shared with Vince McMahon:

“It was a different plane ride from hell. We were coming back from I believe Asia. We were on the plane. Vince was feeling frisky. He was drinking wine, a lot of wine. I was trying to sleep and Vince kept having the talent, the wrestlers, come to me and say, ‘Hey, Kurt, I need to talk to you. Can you come to the back of the plane?’ One of them was Lita, one of them was Trish. I guess Vince thought I was a womanizer. He usually had women come get me and I didn’t smarten up after three women. You know, it was like, okay, Vince keeps doing this. So I would go back to the back of the plane and Vince would jump out from two seats and jump on me and surprise me. I’d reverse him and get him down and hold him down and I’d say ‘Are we good?’ He said, ‘Yeah, we’re good’, and then it would be over.”

“I went back to my seat and then Vince kept doing this for five hours. We were in the plane for five hours. He knew that I smartened up and he couldn’t get me out of my chair by having someone come get me, so he started just jumping on me. He would wait five minutes, I’d fall asleep, and he jumped on me, on my seat, and started trying to wrestle me. I would reverse him and get him down. I must have done this 25 times.”

“One time, we were near the door, you know, when you hit the latch and you open the door, you go out of the plane. We were hitting the latch. We were wrestling and we were leaning on it. The flight attendant said, ‘Listen, the pilot said if you guys continue to do this, he’s going to land the plane right now. Vince goes, ‘Tell the pilot go f**k himself. I’ll buy the fu**ing plane’, and we just kept wrestling”

“There was wine all over the floors. The floors were white carpet, red wine everywhere. It was horrible. So we’re getting ready to land. This flight attendant is stressed out. She doesn’t know what to do with Vince. Vince is up in the front of the plane. I’m in the back. I’m laying down. I’m starting to go to sleep. We start landing. We’re getting ready to touch ground. Chris Jericho is sitting in front of me. He looks down the aisle, he looks behind and he says, ‘Hey, Kurt, look who’s coming down the aisle.’ I looked down as the plane is landing on the ground and Vince is Army crawling to jump on me one more time. He wasn’t even in his seat when we were landing the plane. It was crazy, man. The whole trip was like that.”

“One thing about Vince, what he likes to do, if Mike Tyson came up to him, he’d say, ‘Mike, I want to know what it’s like to get knocked out by you. Knock me out.’ He wants to know what it feels like to wrestle an Olympic gold medalist. That’s what he wanted. Vince is that type of guy. He has to feel what that person’s power is. It’s crazy.”