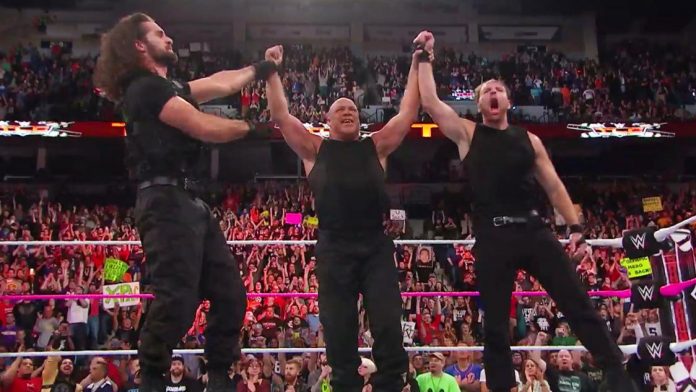 – Above is video of WWE Hall of Famer Kurt Angle talking to Renee Young and Peter Rosenberg on last night’s post-TLC edition of RAW Talk on the WWE Network. The RAW General Manager says it felt great to return and he never thought it would feel this good after 11 years. Angle says he wasn’t expecting to make his return at the last minute but it was such an honor to do it with The Shield and to be in the ring with guys like Kane, Cesaro, Sheamus and WWE Intercontinental Champion The Miz. Angle says it was a big night for all of them but especially him. Angle goes on to say it was awesome to be a part of The Shield for one night and he didn’t mind doing this at all.

– Coming off her win over Mickie James at WWE TLC last night, WWE has a new poll asking fans who should challenge RAW Women’s Champion Alexa Bliss next. As of this writing, 59% voted for Asuka while 17% went with Nia Jax, 9% voted for Sasha Banks, 4% for Mickie, 4% for Emma, 3% for Bayley, 3% for Dana Brooke and 1% for Alicia Fox.

– As noted, tonight’s RAW in Green Bay will see WWE Universal Champion Brock Lesnar respond to the recent Survivor Series challenge from WWE Champion Jinder Mahal. Below is a promo for the segment:

#TheBeast is on his way…@BrockLesnar returns to answer @JinderMahal's challenge TOMORROW NIGHT LIVE on #RAW at 8/7c on @USA_Network! pic.twitter.com/DMIWUp1y7B