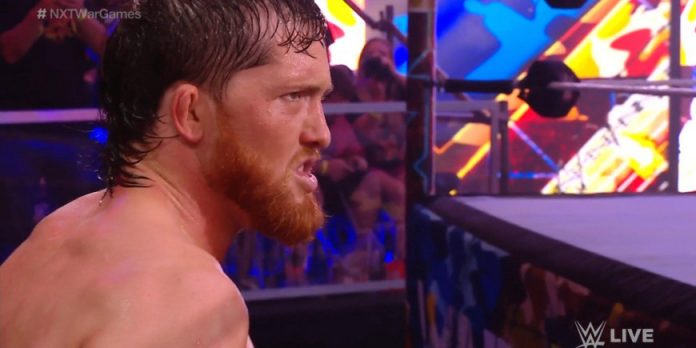 Sunday’s WWE NXT WarGames event saw Von Wagner turn on Kyle O’Reilly. Wagner and O’Reilly challenged NXT Tag Team Champions Imperium at WarGames, but came up short. After the match, O’Reilly stood tall before the crowd as Wagner prepared to attack from behind. O’Reilly saw the attack coming and countered, taking Wagner down and then standing tall over him.

O’Reilly later appeared for a backstage segment and challenged to Wagner for a Steel Cage match on Tuesday’s NXT, calling him as dumb as he looks. O’Reilly said this was the first time he didn’t get to wrestle inside WarGames, so he’s hungry for some steel.

As seen in the post-show video below, Wagner responded to O’Reilly and said his war has just begin.

“Kyle, you think I’m stupid, you wanna leave that cage up come Tuesday? I love that idea,” Wagner said. “You might’ve saw it coming tonight, but come Tuesday, you’re going to have nowhere to run and nowhere to hide. My war has just begun!”

O’Reilly later tweeted about the attempted attack and wrote, “I’ve been turned on before and I ain’t going down that road again. F that newb I’m gonna stretch him on Tuesday in the cage for even trying.”

There is still no word on if O’Reilly is leaving WWE or if he’s planning to re-sign as his contract expires this coming week.

I’ve been turned on before and I ain’t going down that road again. F that newb I’m gonna stretch him on Tuesday in the cage for even trying. https://t.co/YdC7kGqd3N