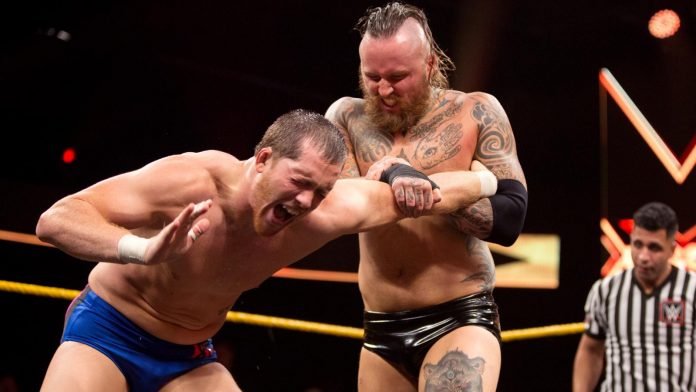 – The main event of this week’s WWE NXT episode saw Kyle O’Reilly debut with a loss to Aleister Black. In the video above, Christy St. Cloud welcomes Kyle to NXT and asks him what fans can expect. O’Reilly says everyone has been super-nice, super-respectful and super-welcoming but he catches them looking over their shoulder because they have no idea how far the bar has been set with his arrival.

The former ROH Champion says the level of competition he brings to NXT is unlike anything the others have ever experienced. O’Reilly says he’s going to change the way people look at the industry, how they look at sports entertainment and how they look at every other NXT Superstar because in their eyes, there’s only one Kyle O’Reilly and seeing is believing.

– No Way Jose vs. Andrade “Cien” Almas has been announced for next week’s NXT episode. Zelina Vega (Thea Trinidad) will be at ringside with Almas for the match. There will also be an in-ring face-off between Drew McIntyre and NXT Champion Bobby Roode next week to promote their match at “Takeover: Brooklyn III” during SummerSlam weekend.

– Tonight’s NXT episode also saw Sonya Deville defeat Jenna Ben Bemmel (Jenna Van Muscles) by submission. In the video below, Deville talks to St. Cloud and says she’s not worried about momentum because that’s something for people like Christy and the losers in the crowd. Deville says she doesn’t believe in momentum, she believes in hard work, dedication and strength. Deville tells Christy to shove her momentum before walking off.

EXCLUSIVE: Former MMA standout @SonyaDevilleWWE reveals how she continues to rack up wins inside the yellow ropes! #WWENXT pic.twitter.com/9WG5IMz14d