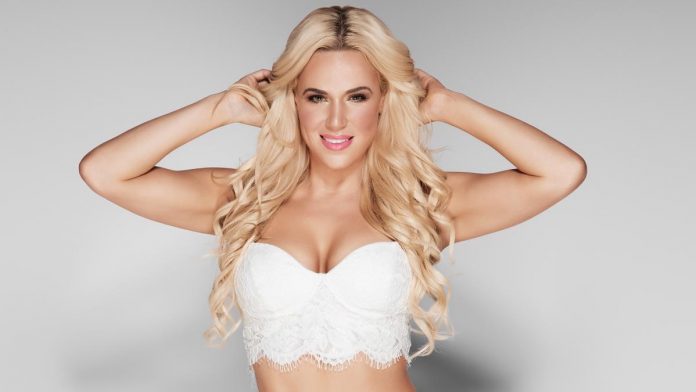 Lana and Aleister Black mixed it up on Twitter ahead of tonight’s Eight-Man Tag Team Match on SmackDown LIVE.

In response to Matt Hardy tweeting about The Hardy Boyz teaming with Black and Ricochet against The Bar, Shinsuke Nakamura, and Rusev, Lana took shots at the opposition. Regarding Black, “The Ravishing Russian” knocked his tattoos.

A dream team?We have Aleister who is so ordinary & insecure he had to tattoo his entire body to fit in with the misfits. Ricochet who just flips all over the ring with no emotion like the cirque du soleil & then we have the legends…THE HARDY’s returning for the 17000th time!YAY https://t.co/exgTDj4B8p

Black responded by saying that Lana’s body is 90% “enhanced”:

Interesting words from someone who’s body is 90% “enhanced”. https://t.co/OVNWoSfNlA

Minutes later, Black responded to a fan accusing him of body-shaming:

Lana didn’t seem bothered by Black’s insult as she responded with the following:

You got me confused with the wrong blonde ? https://t.co/SOTQgi84h1

Lana also said to a fan that it is “the lamest comeback ever” and that his wife (Zelina Vega) should write his comeback tweets instead.

Zero the lamest comeback ever. His wife should start writing his comeback tweets

The Eight-Man Tag Team Match ended without a decisive winner as The New Day ran down and attacked The Bar, Nakamura and Rusev in retaliation after the foursome dropped them on Sunday at WWE Fastlane.