It looks like Lars Sullivan is ready to return to action and it could come as soon as this Sunday at WrestleMania 35 at MetLife Stadium in East Rutherford, New Jersey.

Last November, WWE began airing vignettes hyping the arrival of Sullivan to the main roster. Sullivan was slated to work a dark match at Raw on January 7 in Orlando, Florida, but he reportedly had an anxiety attack upon arriving at the Amway Center and left the premises. WWE then rescheduled his dark match for the following night at SmackDown LIVE in Jacksonville, Florida, but he flew home to Colorado before the show. Sullivan hasn’t been at a WWE event since.

The past few weeks on Raw, Elias has been teasing a huge performance at WrestleMania 35 and on Monday night, he graced MetLife Stadium with his presence.

Elias then said on Twitter that he’ll finally get the uninterrupted performance he always wanted.

I am so multi-talented, charismatic, unique – unlike any superstar past or present and beyond that @WWE often doesn’t know what to do with me.. but at Wrestlemania – they get it right – an uninterrupted full performance is almost all I’ve ever wanted.. https://t.co/8Wjij8rQfM

Sullivan responded to Elias’ tweet with the threat of a confrontation at WrestleMania if he doesn’t play “a good song.”

“All I’m sayin is you better play a good song at Mania.” 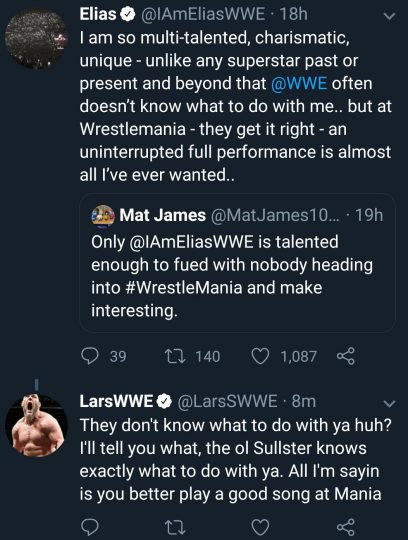 As Sullivan tends to do, he quickly deleted the tweet.

I think he'll be back soon. They are in communication. https://t.co/BwoQ8WA2mT

This comes after Meltzer said earlier in the week that there was no change in Sullivan’s situation.

No change in the situation. https://t.co/oRgrOO6W1W

During a conference call for NXT TakeOver: New York last Thursday, Triple H said the following on Sullivan when asked about him: “I think that is one of those situations where I say you have to wait and see. There’s much more to come.”

Ryan Satin of Pro Wrestling Sheet reported on March 7 that Sullivan is “in a good place” after seeking professional help for what was described as a “mental health incident.”

People close to Sullivan say he immediately began seeking help from mental health professionals and WWE has been incredibly accommodating the whole time. He was said to be feeling better after being out of the spotlight and happy for the wrestlers that got promoted from NXT to the main roster.