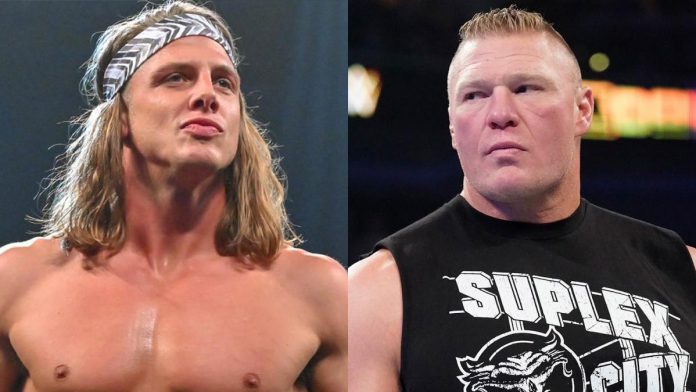 As previously reported, prior to the men’s Royal Rumble matchup on Sunday, WWE champion Brock Lesnar and NXT superstar Matt Riddle got into a backstage verbal altercation that was referred to as a tense stand-off.

Riddle has talked about wanting to retire Lesnar during interviews. This was apparently the first time that Lesnar and Riddle ever met in person. While there was a verbal altercation, things did not get physical.

Lesnar made it clear to Riddle that he will never work with Riddle, so he should knock it off, Mike Johnson of PWInsider.com reports. During a media class at the WWE Performance Center, there was a specific mention of not tweeting and calling out talents from Raw and SmackDown without their knowledge, which got a big laugh from the NXT talents in attendance.

Riddle commented on the Rumble PPV with the following:

After #BROyalRumble, things coulda went better 😉. But tomorrow night on #WWENXT, the bro gonna be back on Cloud 9 after the #BROserweights clinch our #NXTTakeOver spot. #DustyCup

This is a pic from this years 2020 Royal Rumble, as you can tell by my face everything went according to plan #sarcasm #bro pic.twitter.com/k8wuCZSIDF