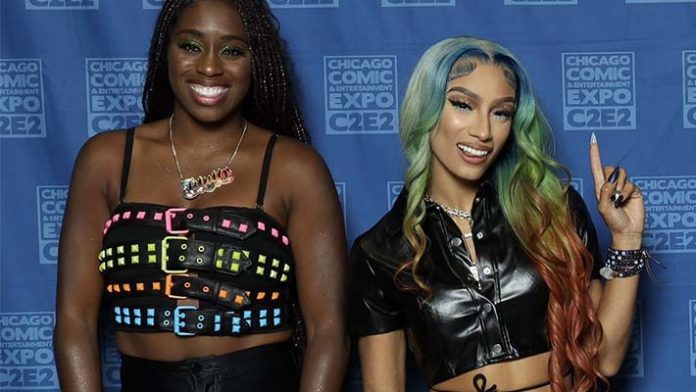 The return of Sasha Banks and Naomi to WWE TV is still expected for the near future, but it appears that the company will hold off until the Women’s Tag Team Title Tournament is completed. Banks and Naomi reached an agreement to return, now with Triple H is running creative.

On the Sunday Night’s Main Event podcast, Dave Meltzer was asked whether he has any updates on Banks and Naomi. According to Meltzer, he has spoken to people who would know, and the belief is that they are back.

He Meltzer, “I mean, everyone expects that they’re in. It’s just a question of which week they want to debut them.”

Meltzer continued, “So since they are not in the tournament, I’m guessing that it’s gonna be the finals of the tournament or right after the finals that they show up. That’s kind of how I’m reading it now. I guess they just felt it wasn’t good to put them in the tournament itself. I think that they want to stagger these new [and returning] people coming in. Sasha and Naomi are obviously the biggest ones they can bring in, so you don’t need to do it in week one. Everybody seems to think that they’re in, it’s just a question of which week.”

Banks and Naomi last made an appearance on WWE television in May. WWE announced that they will be suspended indefinitely for leaving before a live RAW event show less than a week later.

You can listen to the Sunday Night’s Main Event below: