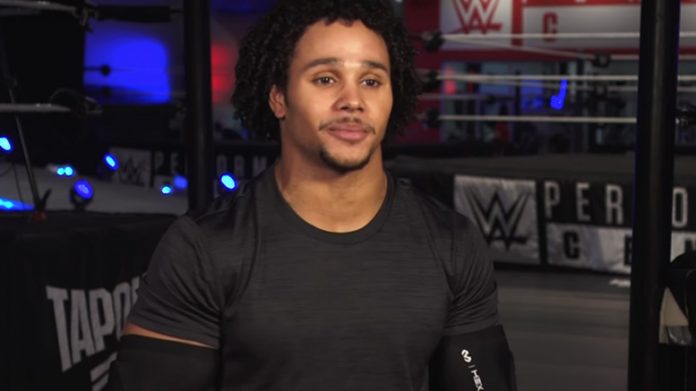 Stacey Ervin Jr., who is one of WWE’s top prospects at the Performance Center and NXT, is rumored to have quit the sports-entertainment organization.

Casey of Squared Circle Sirens claimed last night on Twitter that the gymnast-turned-wrestler has quit WWE.

So… I heard Stacey Ervin Jr quit and judging by his tweets it seems like it's true.

Casey added a few minutes later that Ervin recently had a concussion scare, which prompted him to quit WWE. He was told to think about it but people think “he’s 100% done.”

He was given some time to think about it but people think he's 100% done. He had what I'm told was a concussion scare and that's what did him in.

Ryan Satin of Pro Wrestling confirmed the report, saying that Ervin requested his contractual release from WWE following a recent concussion scare. Satin, however, says that Ervin plans to spend more time thinking about whether he wants to stay in WWE or leave before making a final decision.

Dave Meltzer of F4WOnline was only told by WWE that Ervin remains under contract, but added, “The story that he was thinking of quitting due to a concussion goes back a few days.”

? I’m stoked about this project, & I cannot wait to see the results it brings to those who commit. Start where you are with what you have, & transform yourself. Reply “I’m in!” if your interested. More details coming soon! Stay wavy. ? pic.twitter.com/IvfPkwuKVi

?? Very soon I will be sharing some major news & big secrets that will help transform thousands of bodies, minds & energy levels. It’s simple. Start where you are, with what you have, & own your goals. I’m in. Are you? ? pic.twitter.com/1RG3UVLisp

Hailing from Taylor, Michigan, the 5-foot-8, 180-pound Ervin was a member of the University of Michigan’s 2013 NCAA Championship men’s gymnastics team. He has plenty of medals to his name, including the 2015 U.S. floor exercise bronze medal and the 2015 Winter Cup floor exercise silver medal.

It did not take long for Ervin to make his wrestling debut as he had his first-ever match in September.

Since then, Ervin has been a regular presence at NXT live events in Florida as he’s worked close to 30 matches. Dave Meltzer reported last week in the Wrestling Observer Newsletter that Ervin has drawn rave reviews from management.