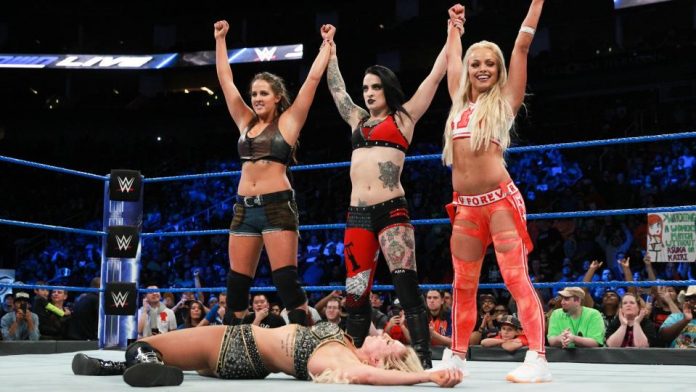 On Monday night, two-time Divas Champion Paige returned to Raw and she brought some friends with her.

During a Fatal 4-Way Match to determine Raw Women’s Champion Alexa Bliss’ next challenger, Paige returned to WWE after more than a year, with NXT Superstars Mandy Rose and Sonya Deville. They laid out Bayley, Sasha Banks, Mickie James and Alicia Fox in ruthless fashion, but they didn’t stop there. When Bliss attempted to welcome Paige and her new allies to Team Red, she suffered the same fate as her would-be challengers.

That wasn’t the only surprise this week as a trio of NXT Superstars made their shocking arrival to SmackDown LIVE on Tuesday.

Ruby Riot, Liv Morgan, and Sarah Logan laid out Naomi and Becky Lynch in the backstage area and later attacked Charlotte Flair and Natalya during their SmackDown Women’s Championship Match.

Behind-the-scenes, Vince McMahon made the decision to promote multiple women from NXT shortly after the Mae Young Classic ended because he felt that both women’s divisions were getting stale (according to Pro Wrestling Sheet).

Mandy Rose was the NXT star most likely to receive a promotion since the creative team had pitched ideas for her to join the main roster before then. There is no word yet on why these pairings were made and who else from NXT was in the running for a promotion.

With so many debuts at once, rumors are swirling about possible women’s Royal Rumble match in January. Sources of Pro Wrestling Sheet haven’t heard anything about that being in the works.

Here are photos of the two groups after the attacks. 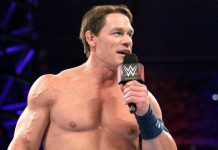