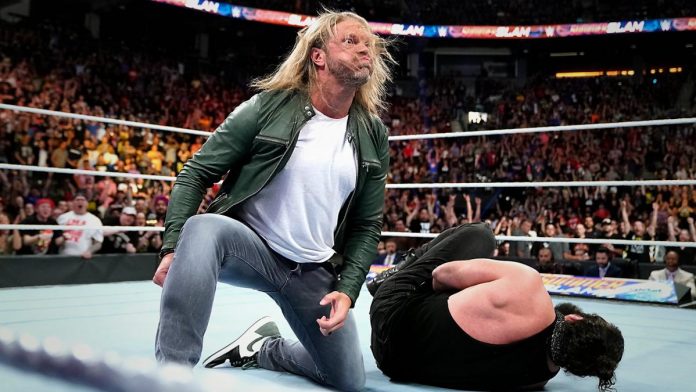 As previously reported, Edge has continued to deny reports that he will be wrestling another match in WWE. However, it appears that the door is open for him to return with Bryan Alvarez of F4WOnline.com noting the following about the situation:

“We talked about this months ago. Edge signed a really nice new contract with WWE. What I was told and Dave as well is that the feeling was that he was going to be cleared to do matches. I’m not saying a full-time schedule or anything like that, I have absolutely no idea. But he would be cleared to do something physical.”

“Let me tell you something. There is no way that a guy who is not cleared for in-ring action is going to return and do a spear. If you recall, Paige retired due to a neck injury and they wanted to write her out of storylines, there was zero physical contact with Paige. Asuka blew mist into her face and she sat down on the canvas and laid down. They are not letting Edge deliver a spear unless he has some semblance of clearance. I don’t know if he will ever be fully cleared…all I know is that happened and that’s what I was told. Edge did a denial, if it was a denial … I believe that you will see Edge in the ring again.”

“I was told that Edge has been training hard and he’s in great shape and the feeling in WWE is that he will be back relatively soon and the prevailing rumor is that he will wrestle at WrestleMania and possibly sooner as a surprise entrant in the Royal Rumble.”