The FOX Network has been advertising John Cena in promotional material for WWE Smackdown’s move to the station in October.

While the ad could be outdated with Rey Mysterio also being advertised, the belief is that WWE will be loading the launch with as many current and returning top stars as possible and Cena will at least be appearing on one show.

It’s unlikely that Cena will be around for a lengthy period of time due to movie commitments. Vin Diesel has recently teased the concept of John Cena joining the Fast and Furious franchise. 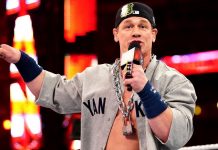