– WWE’s social media accounts are indicating that Dolph Ziggler will have some stand-up comedy shows in the near future. Ziggler made his stand-up comedy debut back in June in Los Angeles. It appears Ziggler is working with TV writer Lauren Greenberg. Ziggler called it “Dennis Miller meets Archer.” WWE posted the following photo of Ziggler working on material:

– Rey Mysterio made a surprise appearance at last night’s WWE live event in Tupelo, Mississippi. After Alberto Del Rio defeated R-Truth, Del Rio attacked him, leading to Rey Mysterio making the save. Damien Sandow ran down to cash in but Rey and Truth came back out to stop the attempt.

During the Truth vs. Del Rio match, Del Rio’s nose was busted open and Truth had one of his earrings ripped off. Truth bled a lot which led to a doctor coming down mid-match to check on him. 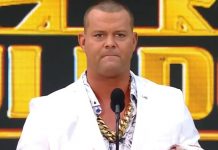