NJPW announced that Jon Moxley was unable to defend the IWGP United States Championship at the King of Pro Wrestling event and the title has been declared vacant as a result. Dave Meltzer of F4WOnline.com and Kenny Omega also commented on speculation that there was another reason for Moxley being stripped of the title.

Due to travel delays resulting from Typhoon Hagibis, Jon Moxley will be unable to defend the IWGP United States Championship at King of Pro Wrestling.

The weather was on our payroll 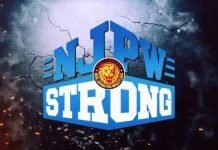