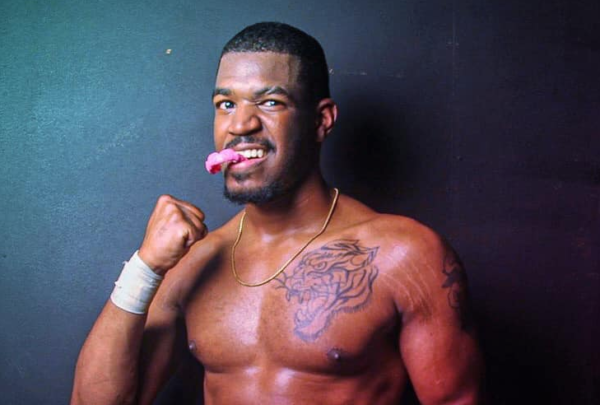 In late-2015, Lee Moriarty sat behind the curtain and fastened on his kick pads for his professional wrestling debut, a tag match in a dilapidated building for the now-defunct Pro Wrestling Express organization in McKeesport, PA. The economically disadvantaged town is often in the news as one of the most dangerous parts of the entire state. The roof of the venue leaked rain water onto the floors, the bathrooms resembled those of a port authority bus station, and chips from the drywall littered the dressing rooms.

This was about as far away from the glitz and glamour of the fame and glory of professional wrestling stardom as possible.

But, true talent can’t be denied.

As cliche as it might sound, Lee, a dedicated fan of the philosophy of Bruce Lee, had the “It factor” as soon as he stepped into the ring. On the blustery night of his first match, “The Apex of Combat” was a natural inside the ropes, showing skills well beyond his experience level. He already looked like he had at least a few years of prior experience with a poise that very few have in their rookie year in the sport.

A student of the well-respected Brandon K, a veteran of nearly 25 years of the Pittsburgh scene, Lee absorbed as much knowledge as he possibly could as he sat under the learning tree of his experienced trainer, a philosophy that he continues to utilize with every aspect of his wrestling ventures today. When Brandon founded his own organization, Ryse Wrestling in 2016, he put a tremendous amount of trust in his star pupil when Lee won Ryse’s first-ever Grand Championship belt.

As a commentator in the Pittsburgh area, I had the chance to call many of Lee’s early bouts, but before he even made his debut, Brandon said to me, “Lee is going to be really good.”

So, it wasn’t a surprise in more recent years that as more people saw Lee in the ring, requests for him on independent cards steadily increased. Chicago, Ohio, and Tennessee were just a few of the 14 states where Moriarty competed, zigzagging across the country on any given weekend. A former rugby player and student of Taekwondo in high school, his natural athleticism transitioned flawlessly to the squared circle. Considering mental preparation as important as physical training, it’s not uncommon for him to be glued to his computer screen to study lucha libre, Japanese, or European styles of the sport. But, the increased notoriety and exposure over the past few years presented its own set of challenges.

“It’s cool being able to travel as much as I do. The toughest part is balancing life. There are times I’m in a car for most of the day or in airports, so I can’t do things that I need to be home for,” Lee explained.

His diligent studying of international aspects of the sport provide him with the ability to be as versatile of a performer as possible, a goal that he strives for in his efforts to be the most complete wrestler possible, giving each performance in the squared circle a unquie spin for that particular audience. As challenging as the late-night car trips, gas station food, or early arrivals at the airport might be, Moriarty considers the chance to perform in front of new audiences as a part of his evolution as an athlete.

“The differences can vary and usually they’re noticeable if you pay attention. Some audiences favor one style more than the other so if you can wrestle multiple styles, it’s easier to adapt to that environment,” Moriarty commented.

That mindset is one of the aspects of his career that has taken him to such a variety of places in the past few years since he began to branch out from his home turf of Pittsburgh, PA. Game Changer Wrestling, Beyond Wrestling, Paradigm Pro Wrestling, and an appearance for Impact Wrestling are just a few of the numerous independent groups that get a unique page of the “TAIGASTYLE” each time Lee bounds through the curtain with his trademark entrance mask on as he is greeted by an enthusiastic crowd.

However, Lee’s approach to learn, adapt an evolve goes beyond just the physical action of the ring. After attending a local community college for graphic design, he earned a certificate in Street Wear Essentials from Complex and Parsons School of Design. Lee knows how important it is, especially in the modern age of social media to be able to properly market and merchandise a brand. Logos, digital graphics, and drawings can be found sprawled across his home work space. Moriarty cites the goal to create merchandise that doesn’t get typecast within the genre of professional wrestling.

“I started off with illustrations and moved into graphic design. I think of merchandise more like street wear instead of fan wear. Merch should look good everywhere you wear it, not just in the context of wrestling events,” he explained.

After the awful pandemic of 2020, a time when even the biggest and brightest events of the industry were shuttered because of the risk of COVID, the entire professional wrestling world looks to return to some level of normalcy in the biggest way possible. One such group is Major League Wrestling, Court Bauer’s organization that has garnered notoriety for its sport-oriented approach to the business. MLW, which currently airs its television program on Vice TV, looked for a way to kick start a new phase of the promotion with an initiative to spotlight fresh talent on a national stage when it returns to a full schedule this July.

In a pro wrestling landscape that has shifted often and has many moving parts in recent years, it was an easy decision to Bauer to bring Lee into the fold of Major League Wrestling, specifically because there’s such a value in the acquisition of quality talent to a roster. Moriarty views this major star as an exciting new chapter of his career and looks the most to most of his MLW tenure.

“A few months ago, Court Bauer reached out to me to keep encouraging me to be different and stand out. He appreciated my unique approach to wrestling then in May I was contacted about coming in to compete for MLW in the summer. It’s really cool that I’m getting the opportunity to do so while still being independent because they see me as someone that can add value to them even as an unsigned talent. That’s rare for a company as huge and successful as they are,” Moriarty said.

Aside from his tremendous in-ring talent, the 26-year-old is unanimously praised for his kindness and polite manner outside of the squared circle. Promoters, opponents, peers, and fans, have noted on social media how the humble grappler deserves the success. Quite simply, you won’t anyone that has something negative to say about Lee Moriarty, which is extremely rare for the wrestling business. In an example of his appreciate to the sport, Lee looks to make the most of the opportunities he has as he embarks on the new chapter of his career.

“The highlights are creating memories for everyone watching. That’s always the most important thing to me, creating the moments. That was the biggest thing I learned over the past year. Fans can expect me to just keep trying to make wrestling as fun and unpredictable as possible. I like people not knowing my next moves. You never know where I’m going to show up,” he said.

So, Lee Moriarty has certainly progressed a long way from his time as an aspiring hopeful in that dingy building with its leaky roof and dust-covered locker room on his debut in the sport in 2015. As much as he already has an accomplished journey with those late-night travels, early wake-up calls, and hours on interstate roads that eventually all begin to look the same, it still seems like this is just the beginning of the story of Lee Moriarty, a talented and humble athlete that understands and appreciates the skills he has, and more importantly with a mindset to make the most of his opportunities. At a time when almost nobody agrees on anything, it’s the common consensus among those that have seen his skills that Lee is on his way to being a national and international star. A national audience will get a chance to see those skills when he debuts for MLW within the next few months.

For me information about Lee Moriarty, you can follow him on Twitter @theleemoriarty
You can go to his web site www.taigastyle.com