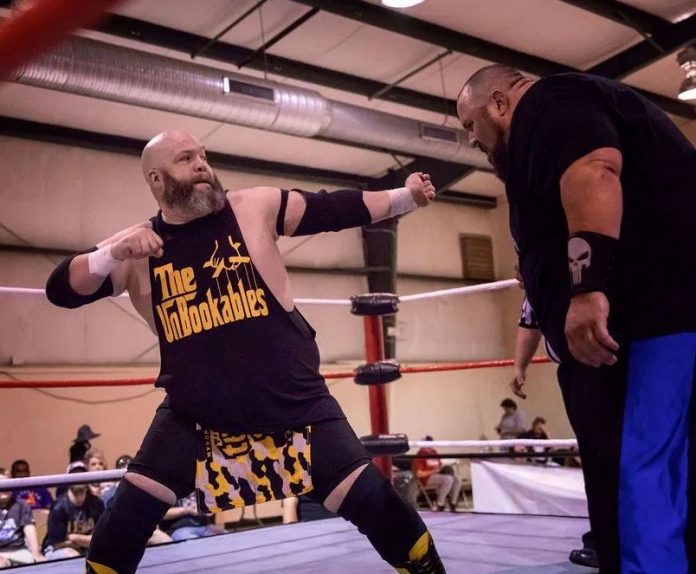 Boomer Payne, a seasoned veteran with ties up and down the east coast, gingerly walked into the Fight Underground closed set taping that was filmed at a studio a few weeks ago, his most recent involvement in a new organization in the Pittsburgh area, a region where he made his name over two decades ago. A lengthy scar decorates his right knee, a reminder of the procedure that repaired a torn ACL and MCL, but that was only one of the eleven surgeries on his resume from a risky style that garnered him a cult following on the independent circuit.

The gritty grappler broke into the business in 1995, training at a rundown warehouse in Houston, Pennsylvania, a borough so small and almost unknown that even Google Maps would have difficulty finding it today. The no-frills introduction to professional wrestling saw Boomer complete the tedious process of landing on the dirt-stained canvas to learn the safest way to hit the stiff mat, as well as the in-ring maneuvers that are considered the building blocks of wrestling lessons for aspiring hopefuls. The dusty building saw Boomer and a few other rookies repeat these courses three times a week for nearly six months until he was ready to lace his boots for his professional wrestling debut. However, that chilly afternoon on October 11, 1995 didn’t have any of the glitz of the Great American Bash or the glamor of Wrestlemania. The Woody Williams Armory in Fairmont, West Virginia was about as far away from the big stage as he could be, but for Boomer, it was a chance to live a dream that some told him wasn’t possible, and he was going to make the most of the opportunity.

“I was like a sponge, soaking up information and retaining it. I wanted to learn every aspect of this business from in ring to backstage. I remember within six months of my debut we were filming television shows. I realized that you must always keep working and keep learning,” Boomer explained.

During those first few formative years, Boomer began to hone his craft anywhere he could, logging hundreds of miles on weekend trips to small cards in various states just to get a chance to gain the experience needed to take his game to the next level. The meager payoffs paled in comparison to the knowledge that he earned during those trips, learning as much from feedback after the show as he did in the ring. As time went on, the professional wrestling industry, similar to the rest of society, began to get edgier and push the envelope. Explicit music became more main stream, Howard Stern had millions of listeners, and Jerry Springer had pay-per-view specials. When sports entertainment began to reflect society, the well-known wrestling boom of the late-90s saw a surge at every level of the business. Pittsburgh, a city almost as well known for its extensive wrestling history as the steel it once produced, was no exception, as a cast of local grapplers ushered in one of the peak periods for the sport in the area, drawing hundreds of fans in a variety of locations, and a few different spinoffs of local TV broadcasts accompanied other blocks of wrestling programming in an era when that local TV clearance actually gave organizations more exposure than early internet access.

Obviously, Extreme Championship Wrestling, the South Philadelphia based group that saw its influence quite literally bleed over onto the national scene, was very popular in the north east, with the Iron City as one of its mainstays, including when the November to Remember pay-per-view was held at The Golden Dome in Monica, PA where hometown favorite, Shane Douglas beat Bam Bam Bigelow for the heavyweight championship. The rise of the hardcore style opened the door for Boomer Payne to capitalize on its popularity in the region and use it as a way to stand out from the pack of a very talented crew.

“There is a golden rule that I live by in wrestling, stand out and be different. I wasn’t a giant Like Leviathan, T.Rantula or Gator. I wasn’t a flyer like JB Destiny. I wasn’t a heart throb like Brian Anthony or Brandon K. I was an average wrestler with an average size. I didn’t have an outlandish gimmick. I didn’t have a flashy catch phrase. So for me to stand out I had to take high risk bumps. Bumps that nobody else was willing to take. It was perfect timing because fans were becoming more blood thirsty,” Boomer said.

On the surface, Boomer might’ve looked like the average grappler, but a slick combination of passion and charisma made him a cult favorite around Pittsburgh. His willingness to take risks and dedication to give the blue collar fans of the area their money’s worth led to jam-packed crowds under the Pro Wrestling Express banner, the now-defunct league that was the city’s premiere group in the late-90s. Chairs, tables, and blood were all a regular part of Boomer’s presentation during his initial run with PWX. Those same elements are also why he had nine confirmed concussions during the course of his 25-year career. Blood and guts were en vogue at the time, and Boomer was willing to indulge that demand, playing a critical role in one of the most legendary feuds in Pittsburgh wrestling lore. 987, a trio consisting of JB Destiny, Boomer Payne, and Big Poppa Gator vs. Rage, a stable of Quinn Magnum, Mad Mike, and Headshrinker Samu was the top-drawing rivalry of the late-90s in Pittsburgh, with weapons matches at its signature attraction for several sellout cards. All six men continued their careers to varying degrees, with Quinn becoming one of the most well-respected bookers in the area, while JB Destiny, who was known as the top light heavyweight of the region, is a producer in the film industry. Samu, a member of the legendary Samoan Dynasty, is based on the other side of the state in Allentown, the site of many WWF tapings of the 80s and where the Wild Samoan training center still runs a school today.


“Obviously, the top of the list is being involved in one of the most memorable and violent feuds, Rage vs 987. The opportunities to work with Headshrinker Samu and to learn from him. Meeting and working with my brother for life Dylan Dean. Having a promotion have enough faith in me to be the face of the company not once, but twice,” Boomer said.

” Boomer Payne is one of the toughest hardcore fighters I’ve ever faced in the ring. He’s deserving of all the accolades he’s obtained,” said Paul Atlas, a grizzled thirty-year veteran of the ring.

Not long after the start of the new millennium, Boomer relocated to South Carolina, a place he hadn’t been previously, but geography that he was certainly familiar with. Vividly remembering the coincidence of holding an elevator door for the legendary Tully Blanchard at the age of 11, Boomer identified the Carolinas as the home base of Jim Crockett Promotions, the flagship organization of the National Wrestling Alliance in the 80s. Transitioning from one wrestling city to another might’ve been a culture shock to some, given the differences in the southern style, but Boomer’s eagerness to gain more diverse knowledge saw this as a chance to learn even more about the sport he has such dedication for.


“It wasn’t so much of an adjustment, but an expansion of my repertoire. I came from Pittsburgh, where hardcore wrestling was prominent, but I already had a love for southern style wrestling. I’ve had amazing opportunities to learn from some of the best in the business like Ricky Morton, Robert Gibson, Bobby Eaton, and Buddy Landell. They allowed me to train with them and pass on this wealth of knowledge within Southern wrestling. While it took years to gain this insight and put it into use, I learned how to control a crowd and tell a story, which is probably two of the most difficult things you can,” he said.

In the two decades since he traded hammer locks and tips for crisp punches with the legendary Bobby Eaton, Boomer Payne became a mainstay of the Carolina circuit, zig-zagging across the region to perform as a wrestler, as well as promoting events, drawing solid crowds with a mixture of established veterans and talented young prospects. Wanting to keep pace with an evolving sports entertainment industry and even faster evolution of technology, Boomer added merchandise and a streaming video network to his duties as a promoter. While t-shirts, trading cards, and memorabilia are produced for the merchandise tables at live events, independent matches, interviews, and a myriad of original programming can be found online through his streaming network.

So, while his previous ankle reconstruction leaves him with a slumped posture, Boomer still enjoys the adrenaline rush to perform, lacing up his boots with a slightly more cautious approach today than he took nearly 25 years ago, still maintaining the original goals he set for himself in that dusty warehouse during training sessions, the opportunity to pursue his passion for professional wrestling, as well as entertaining the audience the same way his wrestling idols thrilled him in the years previously. The drive that Boomer Payne had put him on the path of professional wrestling that has taken him several places, made him several friends, and the chance to entertain for several years. If that was his payoff for all the surgeries, scars, and bumps, Boomer is reassured that his journey was worth it.

“I don’t spend too much time with regret as I feel it is a wasted emotion. I feel very fortunate to be closing in on 25 years this October. There have been hundreds of guys that were only fortunate enough to make it ten years. Going out in the ring and being able to still entertain the paying customers is all the motivation I need to keep going. Although I have adopted a completely different style than my earlier years, The crazy bumps come out for special occasions.”