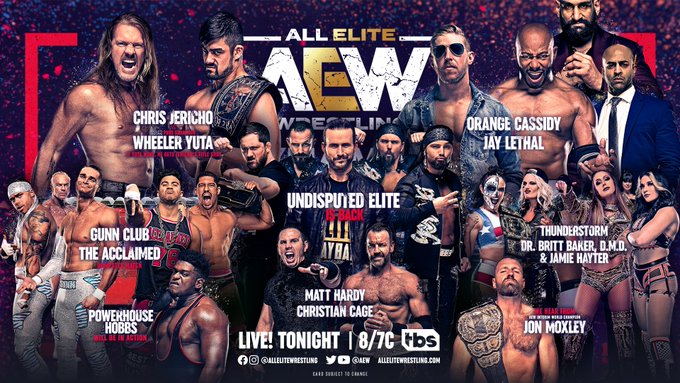 Another Dynamite, another great show, and it seems AEW will start stepping it up as we head into All Out. No matches have been officially announced for the show yet but we have a tease of a match to come.

To start the show off, a great match between Cassidy and Lethal. The focus was mostly on the knee of Cassidy, it was great work with Jay Lethal getting a win on dynamite. After the match, Lethal calls out Wardlow, and throws out the challenge for the TNT title. Wardlow accepts and the match is set for Battle of the Belts later this week. Wardlow vs Jay Lethal for the TNT title.

I like this match, Jay Lethal is great and Wardlow is fantastic. I want to know why Wardlow has been left off TV for the past two weeks, when he won the TNT title it was expected that we would get something similar to how Miro’s run was, which was the last time the TNT title felt relevant sadly. I would like to see it elevated again, and hopefully this is the start of the build.

From here on out, Wardlow needs to be on TV and defending the TNT title, because it does also feel like he has lost a little bit of steam since beating MJF at Double or Nothing.

Finally the return of the undisputed elite, with Adam Cole, ReDragon and the Young Bucks. On last weeks show, there was a tease of a possible Hangman and Bucks reunion. This segment seemed to do just that as the supergroup is no more, Cole was talking about loyalty and how the Bucks are the reason he came to AEW, and ReDragon, how they followed Cole to AEW.

Then they turned on the Bucks, I thought this was great, very well done, and even got a kid crying the crowd. That is when you know you’ve made it as a heel. Wonderful stuff. Adam Page comes out for the save and it looks to be Hangman and the Bucks going forward, and with Kenny Omega nearing a return, could we see a reformation of the Elite?

I love where this is going, this will eventually lead to a huge match with Cole and ReDragon vs The Elite. Whether it happens at All Out or hold it off until Full Gear, we will see.

This was a great tag team match, the women were finally given some time in the first hour which was great to see. Jamie Hayter was the one to pick up the win over Toni Storm after Storm accidentally hit Rosa in the corner with a hip attack. This has now set up a Women’s title match at Battle of the Belts, between Thunder Rosa and Jamie Hayter, that should be a great match. Rosa will retain which seems to be leading to a match with Britt Baker at All Out, which also should be a good match. But it does look like they are setting up Baker to win the title again.

I don’t know about that decision, because it does feel like Thunder Rosa has not really had a proper run with the title, because there is a lot left on the table, but we’ll see where they go with this. However, there does look to be a possibility of a heel turn for Rosa, and if that happens, it could be a very interesting character change for her. If it happens, I think she holds that title for longer, it will be something to watch for.

Chances are this was always going to happen sooner or later, but it is official as it came from Taz himself. After this, Powerhouse Hobbs came out for his match. It was a squash match to establish Hobbs as a great heel.

Post match Ricky Starks ran out to attack Hobbs, Hobbs gets the upper hand though with a big spine buster to Starks and lays him out. This looks to be a great beginning to what is going to be fantastic feud that will elevate both wrestlers.

Coffin match between Darby Allin and Brody King officially announced for next weeks dynamite, should be decent match and the blow off to the small feud they have had.

Earlier on in the show, Christian was being interviewed in the parking lot area, this was taped earlier in the day. This showed Jungle Boy driving into the building attempting to run over Christian, I thought this was great, really heating the feud up nicely.

On to the match itself, it was a great match, which even included a table spot, where Matt Hardy went through the table after Christian avoided the elbow off the apron. In the end, Christian wins the match. After the match, Luchasaurus comes out, in his black attire and his new theme, just something to keep an eye on.

This distraction gave Jungle Boy the chance to jump Christian from behind, grabbed the chair which was going to be used for a conchairto on Matt hardy. Christian ran out of the ring through the crowd before anything could happen.

I am enjoying this storyline, and the more this goes on, the more it looks like the Luchasaurus turn will stick and within the next couple of weeks, the allegiance will be confirmed to Christian. This will give a great complexion to the feud, to get to Christian, Jungle Boy needs to go through Luchasaurus. This is one of the feuds I am most looking forward to going into All Out.

Something I was not expecting on this show, but a welcome segment with Ethan Page, asking why he is not on TV, soon after, Stokely Hathaway comes out, and for 30 seconds or so, Page doesn’t notice him. Then he turns around, Stokely says something into his ear, takes his card, similar to Lee Moriarty and walks away with him.

So it looks like Scorpio Sky and Ethan Page as a tag team is done, and now Ethan Page will go on a singles run. I am excited for this, I think this will benefit Page, and it also looks like there’s a incoming group of sorts with Stokely as the manager. Very interested to see where this goes.

This was a fun match, and an even better rap from Max Caster. The guy is brilliant went it comes to The Acclaimed raps, and they are so over it is fantastic. The line that got everyone was when he said, “No filter, we ain’t Instagram, we’ll make the Ass boys retire like Vince McMahon”. Fabulous line by Caster, hilarious as well.

The Acclaimed win here, as needed, and the post match saw The Acclaimed shut the dumpster, and push it off the stage with the Gunn Club inside, in the same spot as when the New Age Outlaws threw Cactus Jack and Terry Funk off the stage in a dumpster leading up to their match at Wrestlemania 14.

This effectively ends the feud and hopefully now, The Acclaimed start getting some wins under their belt, because I would love to see them up there fighting for the titles.

Chris Jericho vs Wheeler Yuta – If Yuta wins, he challenges Moxley for the AEW Title next week

Another great match on the show, and a great main event. Jericho wins with the liontamer, a move he does not pull out often but used it on this show. This was great, and I am looking forward to the match next week with Jericho and Moxley, should be fantastic. Yuta looked great here, and it will be interesting to see where he goes from here, hopefully he represents the Blackpool Combat Club in the Trios tournament along with Claudio and Bryan. Seeing as Moxley is busy with the AEW Title.

With Jericho vs Moxley next week for the title, it’ll be interesting to see if Punk returns after the match, obviously recent reports have said that the injury update was not positive, but if not Jericho or Punk at All Out, then who faces Mox for the AEW title? I happen to think Punk will come back before All Out, but we’ll see what happens.

The other thing to address is some of the backstage promos, Eddie Kingston challenged Sammy Guevara to a match at All Out after interrupting the Sammy/Tay wedding vignette. 2point0 cut a good promo, as did Daniel Garcia, these guys are going to be big deals, the improvement within the past year from those three has been incredible, excited to see what is to come with them.

The show AEW put on was fantastic, wrestling feels like it is entering a new era, with all the surrounding positivity on WWE this week, AEW producing great television too, this is a huge thing for wrestling fans, the business and the wrestlers themselves.