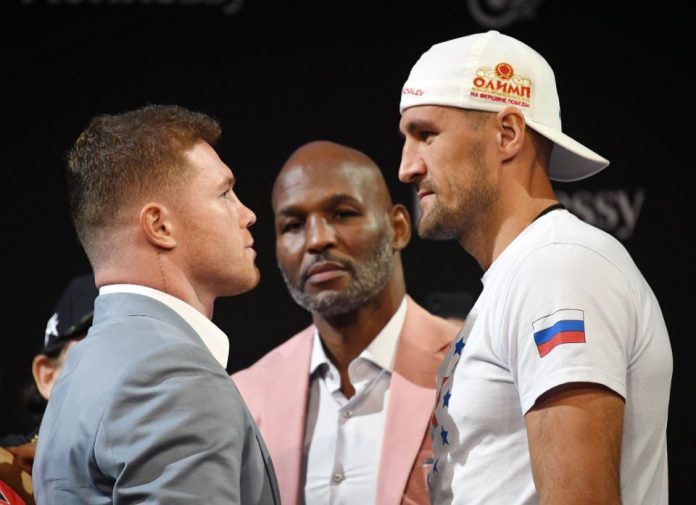 This weekend’s clash from the MGM Grand Garden Arena will see Sergey Kovalev defend his WBO light heavyweight championship against Mexican superstar Saul “Canelo” Alvarez in a bout that will air live on the DAZN streaming service.

While DAZN made a hefty investment into key acquisitions for its boxing content, this scheduled bout isn’t the anticipated Golovkin trilogy most fans hoped for, but it’s certainly not a glorified exhibition for Canelo Alvarez either. In fact, the argument could be made that he might have more to lose than the champion that has his title at stake in this contest.

The 29-year-old Alvarez is widely regarded as the pound-for-pound best fighter in the sport. While that topic could be subject to debate because of the accomplishments of welterweight champion, Terrence Crawford, there’s no doubt that Canelo is the top draw in the sport. With titles held in three different weight classes, Alvarez will move up in weight again to challenge Kovalev, which could be an underestimated advantage for the Russian titleholder.

This bout is the latest in a list of contest that are placeholders until negotiations for the previously mentioned Triple G trilogy fight are (hopefully) finalized. When the two slugged it out in a thrilling bout that resulted in a razor-close draw in September of 2017, it was a shinning example of the sport when two of the top pros actual ink a deal to fight each other. Still, ludicrous scoring from judge, Adalaide Bryd marred the prize fight, prompting many to speculate that Triple G might’ve won the bout if there was legitimate judging across the board, and most importantly, there was a demand for a rematch. The return bout took place a year later and this time Canelo won a close, but controversial majority decision, leaving fans with more questions as to who might be victorious in the rubber match.

As usual in boxing, negotiations for that third fight stalled, prompting Alvarez to defeat Rocky Fielding via TKO in the third round of a bout just a few months later in December of 2018. A unanimous decision win over tough contender, Daniel Jacobs this past May allowed Canelo to maintain his spot as the biggest draw in the sport, but the usual red tape left him without an opponent for the second half of 2019.

Sergey Kovalev is somewhat of an enigma ahead of this fight at the MGM Grand. The Russian power punch solidified his name in the United States when he became the fighter to derail Bernard Hopkins’ remarkable run as the oldest champion in boxing history, garnering a decision over Hopkins in late-2014. The Russian racked up another four wins, improving his record to 30-0-1 before he was set to compete against another undefeated fighter, Andre Ward. Nearly two years after he claimed the light heavyweight belt against Hopkins, the Russian dropped a unanimous decision to Ward. The now-retired Ward made an even more definitive statement in the rematch using a series of combinations to stagger Kovalev until the referee stopped the contest, declaring Ward the winner in the eighth round of the 2017 bout.

The surprising pair of defeats cast some doubt upon the Russian, who rebounded with two wins in a row before he was signed to fight underdog, Eleider Alvarez in August of last year. Shockingly, Kovalev found himself on the canvas and eventually lost via TKO in a stunning defeat. However, just two months prior to that, he was arrested for felony assault after he allegedly punched a woman, resulting in a concussion and fractures. He avenged the loss to Eleider Alvarez earlier this year with a win on the score cards and followed that up with a TKO victory against Anthony Yarde just a few months ago.

But, just prior to the Yarde contest, Kovalev was involved in another incident, which saw him escorted off a plane for vulgar behavior toward a woman. The felony assault case is still pending. At 36, Sergey Kovalev might be past his prime and nearing the end of his in-ring career. The result of this contest against Canelo will answer many of the questions about Kovalev’s future in the sport. If the Russian gets a win over the biggest star in boxing, it gives him the chance at a fresh run at the latter stage of his career, and restores some of the shine to his drawing power that wore off after the two losses to Ward.

At the same time, Canelo Alvarez must maintain his dominance if he wants to keep the demand and the bargaining chips he has for the Golovkin trilogy. A protege of the legendary Oscar De La Hoya, Canelo has a very dedicated Hispanic fan base and boxing fans are drawn to his stellar technical skills. Despite an already extensive record, another trademark of the passionate Mexican boxing tradition, Alvarez is really only now in the prime of his career so maintaining status quo will continue to bring him major cash.

All things considered, Alvarez should win this match-up. He’s younger, in the prime of his career, and more well-rounded, which is why I will pick him to get the victory. At the same time, Kovalev is still a dangerous puncher and could be fighting to remain relevant in his career. Kovalev’s outside the ring antics might overshadow his in-ring accomplishments, especially if he doesn’t look competitive in this bout. The Russian is fighting to possibly add a few more paydays before he hangs up the gloves, while Canelo has millions on the line in the future. If Alvarez’s drawing power is damaged in the slightest, Triple G can make a claim at a better split of the purse for their third fight. It’s a very intriguing scenario because as mentioned, it seems like Alvarez might have more to lose than the champion defending the title in this fight. More importantly, assuming Canelo gets the win, it will be interesting to see if the contract will actually get signed for the Canelo/Golovkin trilogy fight.