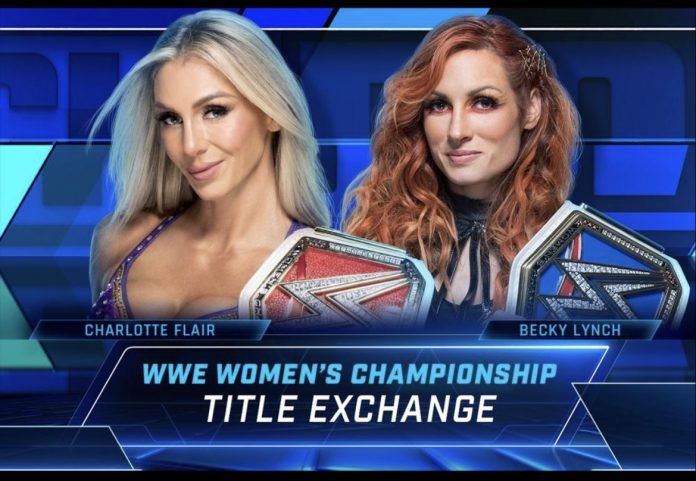 At a time when talent have made more moves within the wrestling industry than any other time in several years, could there be another major jump from the WWE to All Elite Wrestling?

As we saw on Smackdown last week, Charlotte and Becky Lynch were involved in a rather awkward segment where, based on the draft, the two were supposed to trade their championships. Granted, the premise of this promo was tacky and rather flat, but the point being, the exchange is a way to keep women’s titles on both shows. Why this wasn’t done with a title switch instead is anyone’s guess. Charlotte, a multiple-time champion, presumably on her way to beating her dad’s record of titles, appeared to be uncooperative, dropping the title to the mat as Becky reached for it. Becky looked foolish, and based on Sonya’s reaction in the ring, it certainly looked like the segment went off the rails. Lynch responded by throwing her title at Charlotte before the clunky segment concluded.

Often, internet chatter must to taken with a grain of salt, but there were several reports that Becky and Charlotte got into an argument backstage about the segment, and reportedly, Charlotte was escorted out of the building to avoid any further conflict with Lynch. If this altercation actually happened, it brings several questions to the table, including what does this mean for Charlotte’s status, and could she potentially be attempting to force a release from the company?

While there are two sides to every story, on the surface, it looks like Charlotte wouldn’t have much to complain about as far as her WWE tenure. She’s one of the most pushed and featured wrestlers on the entire roster. Granted, the argument could be made that earlier in her career, some of the opportunities afforded to her were based on her last name, but as I’ve written before, she has evolved during her in-ring career to a truly polished pro as she gained more experience and is only now at the start of the prime of her career. Make no mistake about it, Charlotte Flair is one of the best performers on the roster and has a level of star power that only a few surpass in the organization. With the way she’s been presented on television throughout the duration of her time in WWE, I’m not sure what complaints she could honestly have about how she’s booked for television because more often than not, she’s the featured star of the women’s division.

On the flip side, and this is purely speculation, this could be a scenario where ego, not business sense, shaped a perspective, and if that’s the case then it’s nothing new in professional wrestling. Charlotte wouldn’t be the first or last talented performer to overestimate their value based on ego. Perhaps, Charlotte Flair thinks she’s a bigger star than she actually is, which might lead to a reality check at the conclusion of this situation. Again, you have to take online rumors with a grain of salt, but you’ve heard rumblings of her attitude problems before so this isn’t completely out of left field. More than anything, her confrontation with Nia Jax on Raw, where it appeared that a few legitimate punches were exchanged after the match went south, might be an indication that Charlotte’s reputation of being difficult might have some validity.

If I had to guess, and this is just a guess, I would say that Charlotte’s rumored attitude problems are probably true. It looked like she intentionally sabotaged the segment on Smackdown because she wasn’t happy with the writing so that would be a sign of ego getting in the way of business. Becky and Sonya were dragged down in that segment as well because of Flair’s antics. Assuming that Flair might think that she’s too valuable to the company to face any repercussions then she might be in for a rude awakening. The WWE was fine without Stone Cold, Warrior, and Hogan. The company would be fine without Charlotte Flair, too. That’s not to diminish her value either because as I said, she’s one of the most talented on the roster, but the company is going to tout record-setting profits the next few years and has a very talented crew in the women’s division. In many ways, Charlotte is the star that she is because of the WWE platform and how she was pushed during the past several years. This isn’t meant as a criticism of her ability, but Flair was a WWE project from the time she started in the business, without the spotlight of the WWE platform, much of her star power would fade. The value of that amount of WWE TV time can’t be understated, especially when a wrestler is pushed to the level she was in recent years.

Of course, it’s a valid point to bring up All Elite Wrestling in the conversation because not only is it another major league option for talent, but Andrade is on the roster so it would make sense for her to join him there. Keep in mind, before the Dark Side of The Ring episode shed light on some terrible accusations against Ric Flair, it seemed all but confirmed that he would join AEW as well. That being said, even if Charlotte would attempt to cause enough of a hassle to get a release, I really doubt WWE management would grant it. PWinsider’s Mike Johnson, one of the most accurate wrestling journalist, has covered the situation and it was said that Charlotte still has several years left on her WWE contract.

According to PWInsider, Sonya Deville also got into an argument with Charlotte Flair after SmackDown this week.

Sonya was described as “mad enough to want to fight Flair”. pic.twitter.com/RWe8xgzFe4


If Charlotte wanted to force the company’s hand, they could simply leave her off of television for the duration of her deal and allow as much of the spotlight to fade before the contract expires. Keep in mind, Pac, a top-notch competitor, stood his ground on a release and it took the better part of a year before he could go to AEW. Keep in mind, management didn’t use Pac as a major player on television and it still took several months for him to actually get a release from his deal. What are the chances the office would let Charlotte, one of the most featured competitors in the company, get a release from her contract?

Sure, Charlotte has a great contract and makes great money, specifically with merchandise sales added to her downside guarantee, but that’s peanuts in the grand scheme of things. The WWE makes literally billions of dollars with their current TV contracts and the Peacock deal. Basically, they can afford to pay Charlotte to stay home just to keep her away from AEW. All things considered, I still find it puzzling why she would have a gripe with her status in the company, but a reputation for being difficult to work with doesn’t exactly create optimism around a potential run in AEW either. It will be very interesting to see what happens and if the situation will affect Charlotte’s career.