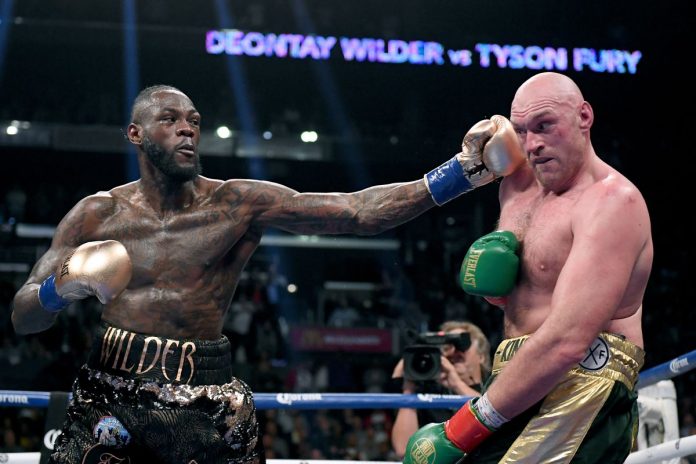 Tonight’s Deontay Wilder vs. Tyson Fury heavyweight title fight will be a rematch of their prior clash of just over a year ago, which resulted in a razor-close draw, prompting many to call for another bout to be signed between the two champions. The pay-per-view event will take place at the MGM Grand Garden Arena in Las Vegas, NV and is the latest contest in the formerly stale division that has main stream media buzzing prior to bell time.

As is the case with most rematches, this second contest could mostly be based on the initial match-up, but at the same time how or if either athlete has added to their skill set could actually determine the winner. Deontay Wilder, an Alabama native that burst onto the scene through the Premiere Boxing Champions series, another reason why the sport needs main stream television exposure to create stars, with his incredible punching power will defend his heavyweight title. The 34-year-old Wilder has a record of 42-0-1 with 41 of his victories via KO, putting it among the highest knockout percentage in the sport. The lone unanimous decision win on his resume was a 2015 bout against Bermane Stiverne, who he knocked out in their rematch over two years later. At 6’7, Wilder is an impressive and humble athlete that punched his way into the championship conversation, and he’s the first American heavyweight in two decades to really make waves in the heavyweight division.

Speaking of the heavyweight rankings, the modern era of Wilder, Tyson Fury, and Anthony Joshua has rejuvenated a previously stagnant division. Even Andy Ruiz, who shocked the world with a seventh round KO of Joshua in June of last year before he showed up in sluggish shape for a losing effort in the return bout this past December, provided some intrigue as somewhat of a wild card of the division. It goes without saying that signature wins make stars, and even if an established competitor is risking a loss with tough competition, the big payday associated with that challenger is usually worth it. The champion can either win and maintain their status while making the big money or a challenger makes themselves a star thus giving the sport more depth. Sometimes an impressive performance can bring a contender notoriety even after a loss. Unfortunately, at some point in boxing, that formula was flipped and a few high profile stars secured a hefty sum for what were essentially glorified exhibition fights. Floyd Mayweather and his very selective process to agree to fight specific opponents is probably the best example of it.

For the heavyweight rankings, Wladimir and Vitali Klitschko ruled the ring for the majority of the previous era, with Wladimir still competing for several years after his brother retired. Credit to Wladimir, he didn’t always have the best opponents, but he fought the best competition of his era. Klitschko fought nearly every contender at the time and dominated the competition. The problem was that the heavyweight division lacked depth to the point that Klitschko’s title defenses were too one-sided to try to sell on pay-per-view. His fights were major draws in his native region of Europe for live attendance, but without credible opponents, he wasn’t a draw in the United States. In retrospect, it’s almost a sad statement about the sport that heavyweight title contests were shown live on HBO on a Saturday afternoon after they were such a major draw on pay-per-view in a prior generation.

So, it should be no surprise that both Fury and Joshua put themselves on the map when they defeated Klitschko in 2015 and 2017 respectively. Without Wladimir being willing to take those fights against the best competition possible, the pay-per-view that is set for tonight probably wouldn’t be possible. The previously mentioned 2015 victory for Tyson Fury was Klitschko’s first defeat in more than a decade, and what should’ve been the start of his run at the top brought Fury to difficult decision in his career. A rematch was in talks, but when he failed a drug test in 2016, Fury relinquished the belt, seeking treatment for addiction and mental health issues. Surprisingly, Tyson Fury reemerged in the sport two and a half years later, as he overcame his addiction problems and received treatment for mental health issues. He made a successful return to boxing with a win in June of 2018 before he won again just two months later to set up the original fight against Wilder. Since the draw, he added two more decisive wins to his record of 29-0-1 in the sport.

Deontay Wilder also continued to rack up wins, as he won a pair of 2019 contests via KO ahead of the Fury rematch. Still, Wilder has something to prove in this bout, considering that one of the main criticism about his rise through the ranks is that his impressive total of KOs were often against subpar competition throughout the early portion of his career. Granted, Wilder has fought some contenders, including two fights against the gritty Louis Ortiz, but he doesn’t have a signature win on his record. Wilder still needs a victory against a top-tier opponent to solidify his status as a true heavyweight star, and this Fury rematch is the opportunity for it.

As mentioned earlier, the story for this rematch is mostly based on the original fight. Deontay Wilder undoubtedly has one-punch knockout power, and for what he lacks in technique, the power is enough to cover for it. Usually, even great punchers must maintain the skill to set up the power shots or they spend the majority of the fight in a narrow-minded pursue of head hunting to find the one punch. In the process, they usually lose the round on points and thus are defeated on the score card. For Wilder, he has enough power that he doesn’t need a perfect punch to end the fight, even a partially landed punch can drop an opponent, which is what really makes the difference with his style.

In their original bout, the action took a predictable path, the more technical Tyson Fury used combinations and his unorthodox style to land more punches than his opponent, piling up points on the score cards throughout the rounds. However, Wilder landed his trademark punches, sending Fury crashing to the canvas in both the ninth and twentieth round. When Fury hit the deck after a jab and straight right, Wilder celebrated what looked to be another KO win. Remarkably, Fury beat the count at 9 and made it to the conclusion of the fight. While there was some debate about if Fury actually got to his feet before the 10 count, it’s more or less agreed upon that he was winning on the score cards, despite the two knockdowns that gave Wilder extra points. The draw was another controversial aspect because some ringside media still thought Fury won enough rounds to garner a decision victory.

In my opinion, this rematch is simple, either Wilder connects with one of those power punches to win the fight or Tyson Fury will artfully dodge them and land enough of his own punches to get a decision. It’s very possible that the charismatic British boxer that brings the Mexican style to the ring, even wearing traditional Hispanic entrance gear in his fight last September will use his precise skill to make it difficult for Wilder to land the punch. Fury definitely has the defense to exploit some of Wilder’s sloppiness with wild punches to land some of his own combinations. Still, I will pick Deontay Wilder to win the fight because he already showed that he can land the punch to drop Fury and he did it twice in the previous fight. Plus, Tyson Fury mentioned in an interview to promote this bout that he would consider retiring after the conclusion of the three fights left on his contract so you have to wonder if Fury is already planning his next venture, especially when he made $15 million for one match a few months ago in the WWE. Regardless, it should be an entertaining bout and considering the money that could be made, it’s very possible their could be a trilogy fight.