Recently, Sting was written off TNA TV and subsequently made two rare house show appearances to work the amount of required shows for his contract. A few years ago, the WWE aired vignettes that many fans thought were the arrival of Sting and there was a major buzz around the wrestling world about a potential Sting vs. The Undertaker match at Wrestlemania. The promos were actually the return of The Undertaker, but the fan response indicated that there’s a buzz around Sting possibly debuting in the WWE. After years of speculation, will Sting finally sign with the WWE?

Sting mentioned during interviews a few years ago that one of the reasons that he didn’t sign with WWE after WCW closed was that he thought the WWE minimized WCW performers, which seems to be an accurate view of the situation, considering the botched invasion angle and many former WCW wrestlers floundered in WWE. Even Booker T, who was probably at the peak of his career when WCW was sold, didn’t get a major title run in the WWE until he was repackaged as “King Booker,” which was a character started in the WWE. Obviously, Sting didn’t want to risk tarnishing his legacy and signed a TNA deal nearly five years after WCW shut down. Sting had a decent run in TNA, which doesn’t exactly say too much considering it’s TNA and they’ve fumbled a majority of angles for the company, but Sting was paid major money during his TNA run so he doesn’t need to sign with WWE for a pay check. If not for the major money of a WWE deal and merchandise, why would Sting decide to sign with WWE?

Ironically, it’s for the same thing that Sting has protected for years, his legacy. During his career, Sting has been known as the performer that didn’t go to WWE and he doesn’t need a run in WWE because he’s already considered a legend. The launch of the WWE network will also give fans more access to Sting’s matches and he will continue to be recognized as one of WCW’s biggest stars. However, it would be great if Sting was inducted into the Hall of Fame and he had a Wrestlemania match as a conclusion to his career. Sting also deserves a better conclusion to his career than a few appearances at TNA house shows in front of a few hundred fans.

I think Sting will eventually sign a WWE deal, but I don’t think he will wrestle at Wrestlemania 30 and considering the Raw after Wrestlemania has become known for surprises the past few years, it’s possible he could debut on Raw. That being said, Sting doesn’t need an entire run in the WWE, but if he’s on WWE TV for a few months, it would make sense to only have a few key matches, similar to the way Brock Lesnar is booked. If Sting only had a match with The Undertaker at Wrestlemania, it would probably still be a successful WWE run for him because what does he really have left to prove? Regardless, I hope Sting signs with the WWE and he gets a good run in the company because as I mentioned earlier, Sting deserves a better conclusion to his career than a TNA house show in front of a few hundred fans. 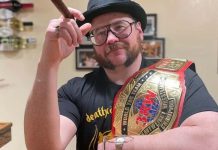