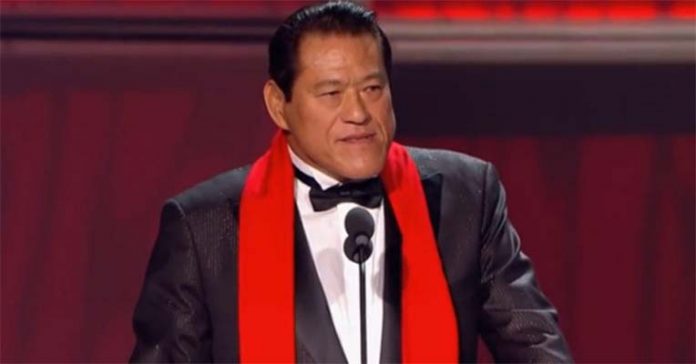 Despite his age and appearing on a television show looking very frail because of numerous health problems in recent years, I was still shocked to hear the news that legendary Japanese grappler and founder of New Japan Pro Wrestling, Antonio Inoki passed away at 79. In many ways it was very similar to when the iconic Bruno Sammartino passed away a few years ago, Inoki had such a mythical aura that it was difficult to believe he was gone. The impact that Inoki had on not only the history of professional wrestling as a whole, but also culturally in his native country can’t be understated.

Quite simply, an article, documentary, or book can’t summarize the true magnitude of the influence that he had on the sport.

A protege of Korean sumo wrestler Rikidozan, who laid the foundation for Japanese professional wrestling in the country alongside Karl Gotch, Inoki was one of his mentor’s most successful students. The other was Giant Baba, who later founded All Japan Pro Wrestling. After the Korean star was killed in a night club in 1963, his students remained top stars for the JWA organization until they both founded their own previously mentioned groups in 1972. The competition was deemed respectful, but fierce. This competition helped fuel a surge in popularity for pro wrestling in the country throughout the 80s, which saw huge crowds flock to the box office to see the stars live, and those shows drew enormous ratings in prime time slots on television. The results of cards were reported in newspapers, and the sport was a mainstream attraction in Japan.

His cultural impact in his native country led to him as a draw around the globe, including the United States, where he competed on the high-profile WWWF cards at Madison Square Garden. Inoki had working agreements with different promoters, including Vince McMahon Sr. and that continued when his son bought the territory in 1983. A notable result of the working relationship was the 1982 Dynamite Kid/Tiger Mask bout in MSG that exposed American fans to a revolutionary style that was not the trend of the WWWF product at the time. Stu Hart sending talent to Japan had a ripple effect that gave Dynamite Kid his first bookings in the WWF, where he later had a big run during the Rock N’ Wrestling Era of the late-80s in America. Aside from Canada, Inoki also had an influence in Mexico as well. However, his most memorable venture, at least for the vast majority of fans outside of Japan was when he fought the legendary Muhammad Ali in a primitive mixed martial arts fight in 1976. The legitimate bout lacked action and was panned by many at the time, and needed to have its closed circus ticket sales boosted with impressive under cards in the United States because of the lack of awareness of the New Japan founded by mainstream American fans at the time, but the contest is almost revered for its influence from a historical perspective.

As controversial as he was mysterious, Inoki had his share of disputes over the years as well.

In mid-1983, the original Tiger Mask, Satoru Sayama opted to leave New Japan, as despite his bouts almost unanimously praised as the best bouts on most cards, he was not given the top billing ahead of Inoki himself. Inoki was elected to the Japanese congress at various times over the years, but seemed to often use his position to create publicity for himself, infamously working a pair of shows in North Korea with WCW stars in 1995. Prior to that, he went to Iraq to meet with Saddam Hussein to get Japanese detainees released, and ran a little-known New Japan tour in Iraq to attempt to establish some diplomacy between the countries. How much of any of these political stunts throughout the years were more to gain publicity than anything else is legitimately anyone’s guess. That’s how much of a puzzle Inoki was over the years.

When Pride Fighting Championship exploded in popularity in the early-2000s, Inoki was often invited to attend the events because of his status as a legendary sports figure. The success he saw from the MMA group, which drew thousands of fans during its peak before a scandal involving the Yukuza led to its collapse in 2007, influenced the direction that he took his own promotion. New Japan Pro Wrestling, which saw two of its three top stars from the success of the 90s, Shinya Hashimoto and The Great Muta, leave the organization, began to book MMA fighters in a pro wrestling environment. While Hashimoto founded Zero-1 before his death in 2005, and Muta completely rejuvenated his career in All Japan in 2001, the MMA experiment in New Japan flopped. Most of the MMA fighters were good athletes, but the best case scenario was that they couldn’t immediately adapt to the nature of scripted shows successfully. The worst case scenario was the uncoordinated Bob Sapp stumbling around the ring as IWGP champion. By 2005, Inoki’s organization was on the brink of collapse before he sold his shares of the group to the Yuke’s video game company before Bushiroad bought the promotion in 2012, providing a level of stability.

Inoki wasn’t out of the promotional game too long, though. He started Inoki Genome Federation in 2007, and its first main event was Brock Lesnar vs. Kurt Angle to capitalize off of the controversy of Lesnar’s dispute with New Japan where he refused to drop the IWGP title because of contract disagreements. The riff between Inoki and the company he founded lasted for several years. Ultimately, IGF was an attempt to reignite the MMA philosophy that didn’t work previously, and IGF fizzled out. He was inducted into the WWE Hall of Fame in 2010 and continued his political ventures in Japan.

Many fans were shocked to see how frail the legendary grappler was when recent video surfaced of him online earlier this year, and were even more shocked when he made a cameo with a video appearance on a New Japan broadcast. Thankfully, it appeared that the decade and a half of animosity was resolved.

Again, to truly summarize the Impact Inoki had would be a difficult task for one specific project, but his main stream popularity and enduring status well after his retirement from the ring speak to his legacy as a sports icon in his home country. The fact that he was a major draw around the globe was proof of his status as a box office success, and the ripple effect of his influence on the pro wrestling business will continue to be seen in the future.