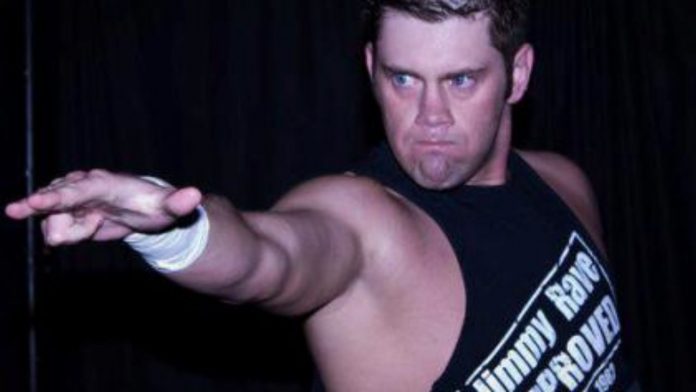 I received a text from one of my wrestling pals yesterday that Jimmy Rave, a longtime wrestling standout that fell on very difficult times within the past year, passed away. Despite his numerous injuries and illnesses, Rave, who quite literally grew up in the industry after he broke into the business as a prodigy at the age of just 16 in 1999, seemed to be on more of an upswing recently when the wrestling world, including the legendary, Mick Foley helped raise funds for Rave’s astronomical medical costs.

The real-life James Guffey had his share of peaks and valleys, both personally and professionally.

I first read about the young standout, Jimmy Rave in a magazine in 2001 that covered the indies for the year, and he garnered press coverage for being so talented at such an early age in the NWA Wildside promotion based in Georgia. The same promotion that provided a platform for one of Rave’s biggest rivals, AJ Styles, gave Guffey to hone his craft when he was barely finished with high school.

At a time when the industry was looking for its next generation of stars in the post-attitude era business, many saw Rave as an athlete that had a lot of potential to make a big splash somewhere among the pro wrestling landscape. By 2003, Ring Of Honor had made a name for itself as one of the promotions to watch in the United States, and Rave’s debut there was arguably the start of the best run of his very accomplished career. Within just a few years, the buzz and reach of ROH expanded, with the major leagues of both WWE and TNA at the time, signing key talent as each organization saw what a top notch product the independent league presented to a diehard fan base. In 2006, a very strong argument could be made that ROH, a group that started in dingy rec centers in Philadelphia just a few years prior, had the best in-ring product in the world. Jimmy Rave was a huge part of that equation and his work at that period of time remains one of the best runs in any promotion of the modern era.

As we know, the ROH business model at the time, which had its positives and negatives, was selling work rate to a niche, but very dedicated audience. As a part of The Embassy stable with the very talented Prince Nana as their manager, Jimmy Rave became one of the best heels in the entire industry that generated legitimate heat from a fan base that often assumed they were “in the know” on the business. In a company built on high spots and incredible displays of athleticism, Rave was one of the most well-rounded performers on the roster, as he could still go in the ring with the best of them, but brought character work to the table at a level that only a few others did in the organization. The highlights of Rave’s original ROH run speak volumes to his talent, as his feuds with AJ Styles, CM Punk, and Nigel McGuinness stood out at a time when the entire promotion had a reputation as a top-notch product.

I had the chance to attend a few ROH shows over the years, despite Pittsburgh not being a regular stop until the Sinclair era of the company. In 2006, a few of our wrestling crew made the trip to Cleveland to see a live event since ROH hadn’t been to Pittsburgh in three years so traveling was probably the only way to see an event in-person when the company had a major hype around it. It goes without saying that it was a tremendous show with a Nigel vs. Bryan Danielson bout on the card, but the main event was actually an ROH tag title match with Austin Aries and Roderick Strong defending against Alex Shelley and Jimmy Rave. In something that was a tradition during his heel run there, the fans pelted Rave with rolls of toilet paper as soon as he hit the ring. It was a wild atmosphere as the members of The Embassy looked like they were in a snow storm of Charmin. Obviously, the niche audience that followed ROH in 2006 were very energetic throughout the night, but it was Jimmy Rave that had the most legitimate heat throughout the entire event.

One of Rave’s more notable injuries during his ROH tenure was a broken jaw, and the pain medication that had to be used during that time to treat the injury led Rave to an addiction to the pain killers. Considering his talent, it wasn’t a surprise when he got the call from TNA to work on national television in 2007, but his year and a half stint was rather undistinguished. I think it’s fair to say that while Rave and Lance Hoyt were a very good team, they deserved much better than a silly rock n’ roll gimmick. After Rave left TNA and resurfaced briefly in ROH, he checked himself into rehab in 2009 to confront his substances issues.

In what was a true success story, Rave not only overcame those substance problems, but he worked within the recovery field to help others that had addiction issues.

After that time, Rave continued on the indy circuit and remained a stable for years, occasionally resurfacing for one-off bouts in TNA and ROH. I actually had a chance to meet Rave and call a few of his matches in 2016. I’m not sure of the details of how or why this was put together, but a promotion called AIWF had co-promoted their “Krazy 8” tournament with a company in Pittsburgh that saw some of the locals of the steel city scene booked for unique matches with a crew mostly from Georgia. It was the standard one night elimination tournament, and Rave went to the finals so I had the chance to do commentary for three of his matches. The great Joe Dombrowski was on the call with me and made it a very easy night on the mic. As I’ve said before, I credit Joe for allowing me to learn the “glue” of announcing and I will always appreciate his help. In the 12 years I’ve been an announcer for the local scene, I’ve had the chance to call matches for a variety of wrestlers. While the vast majority of the athletes are thankful that an announcer wants to get notes and information to make them sound as good as possible on the broadcast, occasionally there are a few that will act like it’s a hassle to provide even the most basic information for an event. Once, a wrestler that was new to the Pittsburgh scene, but had three years experience literally responded, “I don’t know” when I asked for a description of their character. Thankfully, Jimmy Rave was the opposite and was very polite, even saying thank you that I wanted to get his input on commentary. I told him that I was very familiar with his career, but if there was anything specific he wanted mentioned that I could add it into the broadcast. He said he heard that I did a good job as an announcer so any direction I wanted to go with the story of the match was fine. That compliment meant a lot to me because the 20-year pro was more willing to make my job easier than some of those far less experienced in the ring than him.

Another example is that by 2018, Rave was the head trainer at the Combat Zone Wrestling training center and a fluke accident during training left him with fractured teeth. I offered to write an article about his career to help raise some awareness for a fundraiser he had to fix the injury. Again, he was very polite and made writing the article a very easy task.

Sadly, after Jimmy had to have his arm amputated from an infection, he was forced to retire from the ring last November and the past year saw him plagued with more health problems. Tragically, he also had to have both of his legs amputated as well. It was a horrific set of circumstances, but as mentioned, the wrestling world came together to try to help when Mick Foley was one of the stars that helped raise money for Rave.


A lot can be said about Jimmy Rave’s legacy as a wrestler. Some might focus on the negative that he didn’t achieve the heights he could’ve on national television because of his addiction problems. Others would point to the successes of overcoming those problems and helping others with this own struggles. If you want the answer to the true summary of the impact that Jimmy Rave on the professional wrestling industry, a look at the countless tributes to him on social media from his peers tells the story of his career.

My sincere condolences to the friends and family of Jimmy Rave at this difficult time.