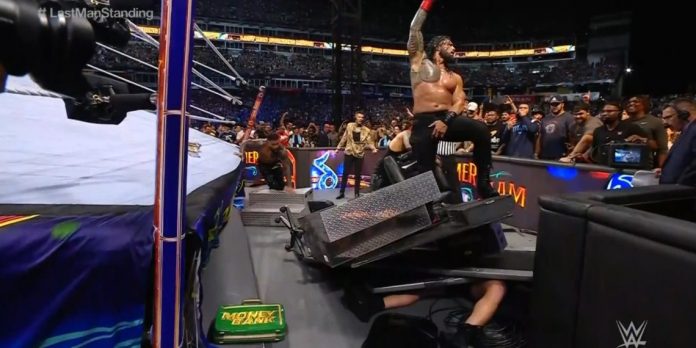 Going into this show there was a lot made out of what kind of changes would be made and how the first PPV of the Triple H creative era would play out. The show had a different vibe from what previous PPV’s have felt like. There is optimism circling around the product and Summerslam showed potential.

In the opening match, a rematch from Wrestlemania 38, Becky vs Bianca again. This was a very good match, their mania match could be considered better, but these two women probably delivered the best match on the card, major props to them. But it was after the match that was extremely noteworthy. Belair retains rightfully so.

Bayley has finally returned after over a year away, coming down the aisle, but only halfway. Dakota Kai then comes out, this was fantastic, obviously, Triple H had something to do with her coming back and I am here for it. Then, finally, Io Shirai joins the pair of them, which was also brilliant, so glad to see her on the main roster.

This has really given the women’s division something it has needed for a long time, new blood and a renewed sense of direction for the division. which I for one am very happy about. As the three of them confront Belair, Becky backs her up seemingly turning her babyface, which is a great decision as her heel run was not really doing much.

I am excited to see where this goes, and very happy to see that finally, the women’s division will be where we all know it can be. I’m so here for it.

Logan Paul vs The Miz

After Wrestlemania, a lot of people were impressed by Logan Paul’s performance in the tag team match against the Mysterios. The question was here, how was he going to do in a singles match environment? As it turns out, incredibly well, the in-ring movements were smooth, and he executed a beautiful frog splash from the top rope to the outside through the announce table, an unbelievable spot.

Paul wins as you would expect but if he is going to put this kind of effort into his work whenever he shows up in WWE, then let him have a match so long as it doesn’t take away from the current talent.

Short match here, truth be told it didn’t really do anything, Lashley retains as expected. Theory has another loss though, he is now 0-8 since winning the Money in the Bank briefcase. Hopefully, this changes, as the mentality that exists is the Money in the Bank holder can lose all the time and be fine.

I disagree, I think they lose a lot of credibility to the point where they cash in and it is not believable for the fans if someone who has lost all the time suddenly wins a championship.

But Theory should hold on to the briefcase for a while yet, and be built up in that time, in which case he will be believable enough when the time comes.

The Judgement Day vs The Mysterio’s

Realistically, this match was all set up for the return of Edge. That is exactly what happened as The Mysterios win the match with the help of Edge. I thought this was done very well, hard to see The Judgement Day lasting beyond this feud to be honest, they have not been booked like a threat since Edge left the group, so this could be the end for them once Edge gets his revenge.

I think the next step here is Edge vs Balor at Clash at the Castle. Edge gets revenge, then maybe goes on and challenges for the WWE Championship, probably will not win it, but he gives an option for a challenger.

The match that was taken off the show, after Rollins attack on Riddle on the Raw this past week. Riddle shows up serious and calls out Rollins. Rollins came out and in the end laid out Matt Riddle.

Now this match not happening is a slight shame because it would’ve been a fantastic match, however it seems they are holding it off until Clash at the Castle which is fine, but it means that the match will get more build and hopefully have more heat to the feud, which I am not going to complain about. Seth needs a win though, which is probably why he did not get a surprise opponent like Wrestlemania.

Similar story to the Miz vs Paul match, where the outcome was obvious, in that McAfee would win. He once again put a great performance in, the crowd was into it as Pat is so over.

I think the story here is with Corbin, and hopefully this represents a massive change in character, cause he sorely needs it. You could go in the lone wolf direction like back in his NXT days and his first couple of years on the main roster. I just don’t feel like he’s been the same since. But even if you want to go in another direction, that is fine, but we have reached the time for a change with Corbin’s character.

The Usos vs The Street Profits – WWE Tag Team Championships

After their stellar match only a month ago, the stage was set for them to equal or even top it. I just don’t think the match entered its final gear, and probably could’ve gone for another 10 minutes. It was still a solid match but was not at the level we expected.

The Usos got the win here, but the bigger story might be the break up of the Street Profits, with a potential Montez Ford heel turn, especially with the way he looked on the show, more aggressive and such. Personally, I don’t think it would be a good idea to break them up, simply because, without them, what other babyface teams are there?

It’s obvious that Ford will be a future world champion in this company, but I think they should hold off on the turn for now and keep them together until the tag division is built up to a point where if you break them up, it won’t hurt the division. Not to mention, I think Dawkins could be a solid mid-card guy, so hopefully things go well for the both of them if they break up.

This was a short match, with Ronda focusing on the arm of Liv. The ending is where the story is, it looked like Liv got the pin but she tapped just before the three count. She retained the title, which caused finally, the thing that has needed to happen for a while. Ronda turned heel on Liv Morgan after the match and attacked her.

This is a huge change, a big positive change, something that should have been done since she was brought back at the Royal Rumble. But with Triple H in charge now, she is a heel and it is going to help her so much because she wasn’t cutting it as a babyface.

So with this change, the potential is there. Not to mention, the seed was planted for a Wrestlemania match with Becky vs Ronda with both respective turns. I think Ronda will eventually take back the Women’s title and hopefully now as a heel, she can be much better.

This is was a car crash, no other way to describe it, Lesnar was booked like a monster who would just keep getting up. The man came down to the ring with a tractor, in which during the match he moved the ring with the tractor, it was insane. And probably their best match since their first one at Wrestlemania 31.

With that said, this needs to be the end of this feud, we need to move away from the Reigns v Lesnar feud, and get some fresh opponents for Reigns, like a Bobby Lashley or AJ Styles. Now earlier on in the show Drew McIntrye came out and basically let everyone know it doesn’t matter who the champion is, he is the number 1 contender for the World title at Clash at the Castle.

I think the way to go here is Drew wins the Universal title because if a brand split is in effect, two world titles are needed. I am sure you can come up with a way to de-unify the titles. But with Reigns being part-time now, the time has come for his reign to end. What happens with the WWE championship? I think Seth Rollins should win it at some point, and faces a returning Cody Rhodes at Wrestlemania after winning the rumble. Cody wins and goes from there. But we’ll see where they go with this.

All in all, I think Summerslam was enjoyable, was it fantastic? No, but the changes are there, as is the potential for a big positive shift. The other thing worth mentioning is the commentary, it feels so much more natural, and a huge positive change when watching these shows. Michael Cole was fantastic on this show, as was Corey Graves, huge props to them.

This show was the first real echo of what changes are to come and I for one am excited about the future.