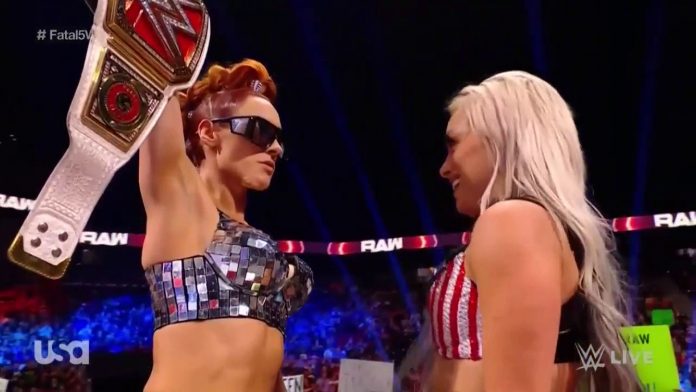 The lowest common denominator being used in the professional wrestling business is nothing new and sometimes, it can be a good thing if a particular angle or character is presented correctly because the goal of an international company, especially a publicly-traded corporation, is to market to the widest audience possible. On the other hand, the lowest common denominator can be nothing more than low brow attempts at cheap heat because there’s nothing else compelling about an angle.

The WWE is a rather unique case, as its market share allowed it to capitalize on the climate of the television business and the emerging streaming markets to become the most profitable the company has been in its history. However, make no mistake about it, networks that want live sports programming to attempt to counter DVR and thus secure a better ad rate, are the reason why the WWE inked its massive TV contracts a few years ago. Too often, those in the “wrestling bubble” get lost in the star ratings or the demos, both ways to inaccurately skew the business side of the sport. From a television perspective, a consistent number is a very valuable commodity, as it gives networks a pitch to secure advertisers. Granted, the WWE ratings have been sluggish, but the core fan base, as well as the track record of the organization with sponsorships let potential advertisers know that an audience will be exposed to their products. For a comparison, The Walking Dead on AMC was one of the highest-rated shows on television a decade ago and was in the pop culture conversation. Several years ago, the ratings took a drastic decline and viewership decreased exponentially compared to the peak of the show. The reasons for that are numerous, but the point being, when the zombie show took a dive, there wasn’t an upswing for it, but rather a series finale. Again, the WWE declines in numbers, something that is always a part of the sports entertainment business, but there’s a strong core audience, and that’s a major reason ad revenue and sponsorships are such key pieces of the business model. If advertisers secured commercial time for the season that started the decline of viewers of The Walking Dead, their products didn’t reach the intended audience.

The level of consistency, at least of the loyal fan base, over several years makes it much easier for companies to invest their ad dollars to put commercials on their air during WWE programming because they know their products will be seen by a specific number of viewers.

As mentioned, the company is the most profitable now than any other time in history so why is the product so bland?

This is where the corporation that is on the stock market has a different agenda than just a sports entertainment company. I’ve written about it before, but WWE brass has to serve a lot of audiences as an international company on the stock market, and the harsh reality is, management will look to appease investors before the fans in attendance because ultimately, the investments of those stockholders are what allowed WWE to become a billion dollar company.

Another major point that I’ve discussed before, the WWE has guaranteed money for its TV deals and the Peacock deal so there’s not nearly the same amount of pressure to generate ratings or sell pay-per-views to the audience. The fact that the writing team doesn’t have to “sell” a $40 pay-per-view to the audience in the modern era might create an unintentional level of mediocrity for the product. The bottom line is, the WWE will make the same amount of money for Raw and Smackdown regardless of if they hover around two million viewers for each show or if they set a ratings record. They will make the same amount of money for Wrestlemania regardless of how many people actually watch it. Granted, everyone works hard, but with those type of guarantees, it’s almost too easy to even unintentionally put it on autopilot for the majority of the product.

As far as why the product is so bland, I would say that because of the record-setting profits, why change it? How this effects the future of the company is a completely different matter, but right now it’s tough to criticize the process when it yields the biggest profits in the history of the organization. That being said, I think WWE brass had a paint-by-numbers approach for the past several years and basically, the entire product has become a repetitive pattern. There’s nothing “must-see” about the product, and some key decisions could actually hinder, not help, a star’s progress. Big E is one of the best on the roster, but was booked to lose to Roman Reigns, who is doing the best work of his career, at Survivor Series. Why make Big E look secondary so early in his title run? The entire Raw vs. Smackdown concept is silly so management could’ve avoided Big E getting pinned by simply not booking the match. Why is Survivor Series Raw vs. Smackdown, anyway? The answer is because that’s what the company has done the past several years. It doesn’t matter if current angles fit a specific gimmick or scenario, management will shoehorn feuds into gimmick matches without any logic. Does the feud justify a cell match or is it booked for a cell match because that’s what’s on the WWE calendar?

Eventually, when ratings slip, management will try to artificially boost the number, which doesn’t necessarily create any buzz for the product. If numbers are down on Fox, a Brock Lesnar appearance generates an increase for one week, and if Raw remains sluggish, maybe something “controversial” will get people talking about a segment. However, none of this builds anything for the product as a whole, which is why numbers are stagnant.

THIS FRIDAY on #SmackDown@BrockLesnar is BACK!


This past week on Raw, a few of those lowest common denominators were used to attempt to get some headlines. Edge made a reference to AEW in a promo with The Miz, which is fine because the fans that got the reference know that it’s more Edge towing the company line than anything else. The Becky Lynch/Liv Morgan promo mentioned the WWE releases and went as far as to claim it was Lynch’s fault that those performers were fired. First of all Liv and Lynch can work an entertaining feud without the attempts at cheap heat, and if nothing else, a reference like that doesn’t reflect well on the company. It pushes the narrative of corporate greed because not only did a company that touted record-setting profit release talent during the pandemic, but they are also using more releases as a part of the script. It doesn’t create a very fun viewing experience when the real-life situation of someone losing their job is used in a scripted wrestling show. Nobody is going to script how those performers are going to pay their mortgage next month. It’s just low brow scripting that doesn’t add anything to the feud.

"Who knew #BigTimeBecks cried like such a little baby?!" – @YaOnlyLivvOnce


We’ve discussed how important the consistent fan base is for the WWE business model, but at some point, you have to wonder if lame attempts to get cheap heat will erode some of the core audience. Keep in mind, there is supposed to be entertainment, and too often it seems like watching Raw is more of a habit than anything else. I’m not sure how management will generate “must see” TV, but considering the record profitability while the product is so stale proves that the dynamics of the television business, not the popularity of the product is the reason for the company’s major TV deals.