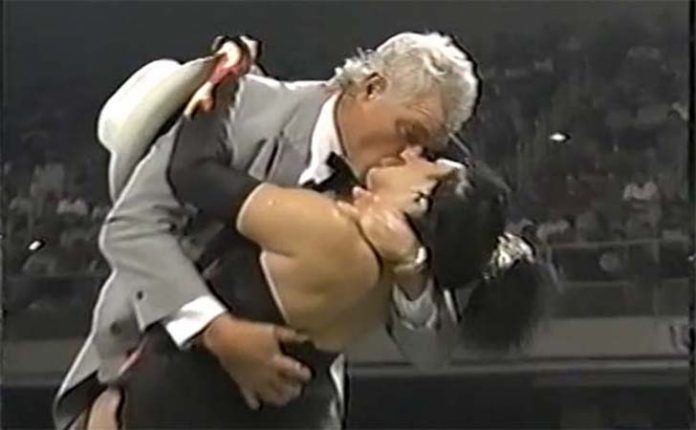 Hello, avid readers of PWMania, my name is Daniel Veillon, and I’m a brand new columnist. My first column is about the first-ever ‘love’ storyline I saw as a kid and how it possibly affected the business. Before I start, I want to say that because pro wrestling is like a variety show, they weren’t afraid to do this idea in the 1990s: the business was changing, and both WCW and the then known as WWF, followed suit to change also.

In June of 1995, according to Eric Bischoff, Ric Flair came up with having the two managers, Sister Sherri and Col. Robert Parker, do a storyline where Parker chased Sherri. During the Great American Bash pre-game show, Col. Parker started calling Sherri a flousy and said Harlem Heat weren’t any better than the WCW World Tag-Team Champions, the Nasty Boys. She came and asked if his team wanted a piece of Harlem Heat, and this is how it officially started.

When she came through that curtain, they had instant chemistry, and that’s why it worked. It took a mere two minutes to make it intriguing. When Parker wanted Mean Gene Okerlund to go to the bookers and make the match official. Parker started calling himself an American legend, with Sherri asking, “By whose standards?” This was where it got really good; Parker said that she just got off the stage and said he thought she was acting like she was probably yearning to be with him romantically. He kissed her, she knocked his hat off his head, and he fell. This was hilarious. They added the match to the PPV as it was delivered so well.

The match wasn’t a classic, but it helped continue the teams managers storyline. Harlem Heat won, and I think they needed to continue their story with the Nasty Boys, so that’s why they were probably booked to win. I believe how good they were together was how quickly the booking team put them together: After one whole month of Parker chasing Sherri, Harlem Heat regained the WCW World Tag-Team Titles and finished their storyline with The Nasty Boys and new tag-team The Blue Bloods.

The beginning of this story’s chapter turned from Buck and Slater being the last team to get a title shot to getting a title shot started in the main event of the Bash at the Beach pre-game show: Parker’s Team Bunkhouse; Buck and Dirty Dick Slater defeated The Stars & Stripes (Marcus ‘Buff’ Bagwell and The Patriot). Harlem Heat later said they would give them a shot at the titles. I believe they had the match on the following Saturday Night episode. They would always talk about the Championship Committee, which is why this was plausible in the story.

Before I go into what happened in the WCW World Tag-Team Title Match, I need to mention how well they kept the continuity with Parker and Sherri: I remember finding a VHS Tape with a WCW show on it, and it had Parker trying to give Sherri flowers and she rejected him again. Before Bash at the Beach, Sherri fell off the ring apron and fell in Parker’s arms: Parker put her down and kissed her, and she bit him; I think that’s hilarious because it shows how he made her hate him more by being forceful.

When the title match happened, Parker waited until the referee, Randy Anderson, warned Sherri not to get too close to the action before he decided to help his men; Parker took Dick Slater’s boot and knocked Stevie Ray out with it – winning the title. Sherri’s reaction was hilarious; she went from ‘what happened?’ to fussing in minutes. I liked how Sherri was so mad that she threw her shoes at Parker. She even took her hair stuff out and put her hands over her head.

When she spoke about wanting a rematch for the titles, she said how her men could handle his men, and she could beat him any day of the year with both of her hands tied behind her. Parker decided to offer her a five-man and a lady tag-team match at Clash of the Champions, with the agreement that Harlem Heat would get their rematch. 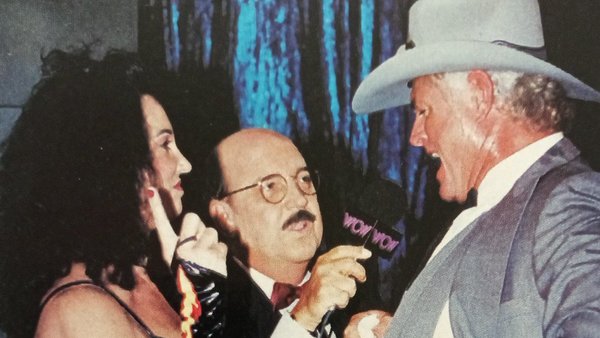 I’m going to be honest, there were two women in wrestling that I thought and still think of as being model-like in their beauty; Sherri and Madusa. I remember thinking to myself, ‘the Col.’s one lucky man.’ Even though this was funny and was meant to be funny, it was also with someone wonderful.

To make it more straightforward without sounding superficial, it’s like when we’re kids, and all we think about is what kind of toy we enjoy playing with. Sometimes when we’re adults, we can get that same feeling when we see someone we think is beautiful. I say that because I believe that beauty is in the eye of the beholder, so I believe that every man and woman can be considered in the same way.

In the match, she went for her finisher, The Top Rope Splash, but missed and fell ‘unconscious.’ When she got up, she fell in ‘love’ with him. She jumped to kiss him, and he fell to the mat. When she continued kissing him, she got the three count. The funny part was that he started running away from Sherri, which helped the story and the gimmick. We began to understand that he was a big blowhard.

Even though he was interested in her, he was more interested in a ‘gradual’ way of acting. She went too fast for him. This lasted for three weeks. At the WCW Fall Brawl: War Games, the pre-game show, he gave her flowers, and one-half of the Nasty Boys broke them over Parker, with them both falling. Dick Slater knocked out Brian Knobs to cost them the match against the American Males. Sherri kept pieces of the flowers, and when their teams faced each other, she kept looking at the pieces and Parker. Things got out of hand, and all four men started fighting everywhere.

I got excited as a kid when Parker motioned to Sherri to move to the side. They both climbed on the ring apron, and I remember thinking, ‘this tells more of a story than what we see today.’ Sherri started crawling toward Parker because they didn’t want to rush things, and I remember wondering what she told him as he walked toward her. He helped her stand up; she took his hat off and put her hand through his hair. They finally kissed each other.

While this happened, the Nasty Boys came down and hit Dick Slater with his boot. Parker helped Sherri take the stuff out of her hair, and once again, Sherri put her hand through Parker’s hair and kissed him again. I was amazed at how Sherri’s nose was shaped uniquely. I realized that’s why she was beautiful; the shape of her nose was unique, and it added to her beauty. The best part was how they responded to their kiss. 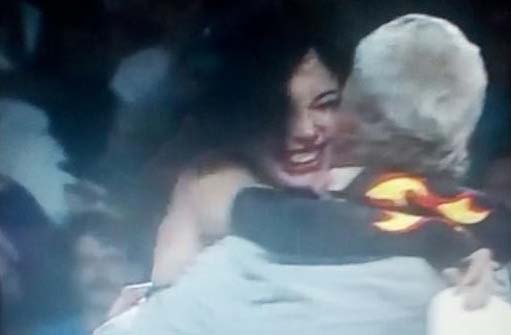 You can see that Sherri was laughing at how they pulled one over on the fans.

The picture where Parker was about to put Sherri down was the scene when Bunkhouse Buck was pulling Parker away from Sherri. This was as important as the kiss itself. Both teams needed to know what was going on. I liked how Sherri claimed that it didn’t mean anything. You could see that it was like two teenagers getting caught by their associates.

It was a masterpiece in storytelling terms to finish with my thoughts on how they were finally put together. To go from the attitude of ‘I can’t stand you’ and draw the crowd to see it to the end takes art. This also is the kind of body language that makes you wonder, ‘what were they saying to each other when the music was playing?’ I even thought to myself, ‘was this ad-libbed?’ This was, to me, the best storyline of 1995. It was also my favorite storyline ever.