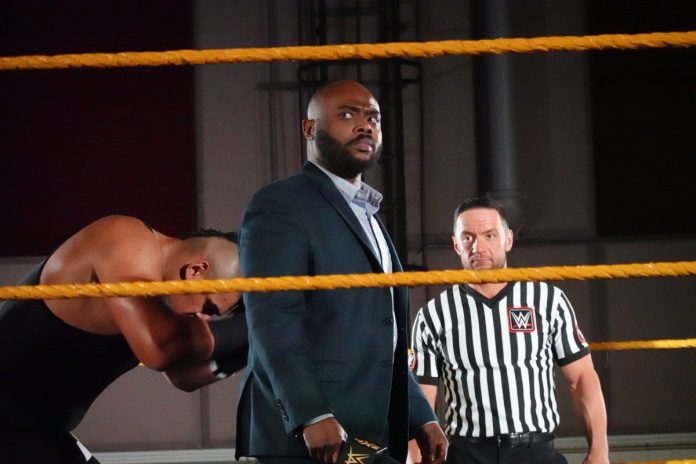 As seen below, Bivens came to the ring to cut a “dark heel manager promo” against the crowd at the NXT Arena from Full Sail University in Winter Park, FL. Bivens revealed that he’s looking for top stars to join Bivens Enterprises. He added that Bivens Enterprises is coming soon to NXT, but you can’t rush perfection. Bivens also called himself the “Puff Daddy of NXT,” according to a fan in attendance.

Bivens took to Twitter after the show and commented on the segment.

“I had an opportunity of a lifetime in 2018 at WWE Axxess. I bought this suit for ‘good luck.’ Since last year, I’ve worked hard to be in the best shape possible. Wearing it tonight meant a lot to me,” he tweeted.

Bivens, real name Stokely Hathaway, worked for ROH, EVOLVE, and MLW before signing with WWE in March 2019. He’s also used the name Court Moore in NXT, but they settled on his current name last May. It’s been rumored that WWE talents and officials have high hopes for Bivens in WWE as he’s received rave reviews for his work over the years, and since working NXT live events. WWE has tried Bivens out with several NXT Superstars at live events over the past year, including Babatunde Aiyegbusi and Taynara Conti, among others.

You can see Bivens’ tweet below, along with photos from the segment:

I had an opportunity of a lifetime in 2018 at WWE Axxess. I bought this suit for “good luck.” Since last year, I’ve worked hard to be in the best shape possible. Wearing it tonight meant a lot to me. pic.twitter.com/NzZnGS3gBL

Malcolm Bivens dark heel manager promo interrupts Alicia Taylor. “I am the Puff Daddy of #WWENXT. Bivens Enterprises is coming soon. You can’t rush perfection.” Bivens kills a “Bugenhagen” chant with, “Last time I checked this is Full Sail, not Showtime at the Apollo!” pic.twitter.com/HdN3p2ms7D

NXT is the land of opportunity pic.twitter.com/TWHuRLYW13