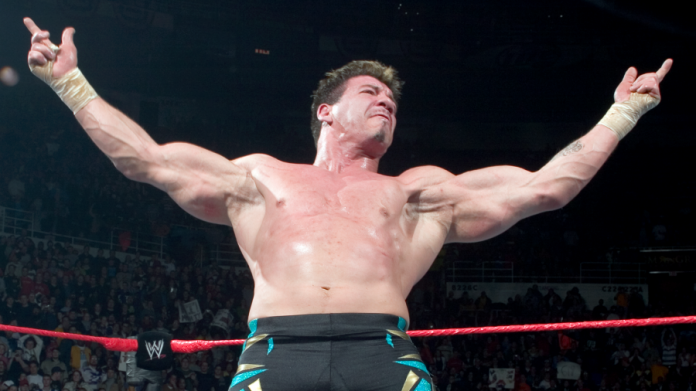 The world of professional wrestling in 2004 was not as popular and vast as it is today. In 2004, you only had one promotion, WWE.  One of the best workers and talents on the WWE roster at this time was Eddie Guerrero.

Eddie wasn’t a man that needed to have a championship to be over – he was “over” with the fans no matter what.

Whether you liked him or not, Eddie Guerrero went out each night he worked and put on a wrestling clinic for everyone in attendance and at home on television.  Eddie excelled at bringing emotions out of wrestling fans in every feud he had, and his feud with Brock Lesnar did just that. Granted, the feud Lesnar was having with Goldberg was at the forefront, but most fans will remember the Guerrero and Lesnar feud more than the other.

When you sit down and watch a professional wrestling event, you want to be entertained and escape the day-to-day issues you may be facing.

Some matches succeed in doing this, and some do not.  Matches that tell a story can easily succeed in the annals of wrestling history.  When fellow podcasters or wrestling fans ask me, “I’m looking to go back and watch past WWE matches, what should I watch,”  I generally always point them in the direction of this match from No Way Out 2004 at the famous Cow Palace in Daly City, California.

After winning a 15-man Royal Rumble on Smackdown before this Pay-Per-View, Eddie Guerrero earned the right to challenge the WWE Champion Brock Lesnar at No Way Out.  Even with the appearance of Goldberg in this match, Eddie made the best of the opportunity and put on a wrestling clinic against Lesnar.  While telling the story of the dominant force that Lesnar is, the majority of the fans weren’t giving Eddie much of a chance to walk out the champion.

Being a wrestling fan for the better part of 20 years, I always enjoyed matches and feuds that brought the emotion out of you.  Great matches make you happy or sad.  They make you laugh, cry, or be brought to a point of madness when you dislike a certain wrestler.  The combination of Lesnar’s amateur wrestling background and Guerrero’s drive and determination to be the absolute best in the business made this match one of the best during this era of the WWE.

During a time when people wanted a hero to believe in, Eddie Guerrero was the hero that wrestling fans could love and believe in.

Coming into this match as the ultimate underdog, Eddie always made sure that fans would never forget the match, and this championship match didn’t disappoint.  Maybe not one of the best two-sided matches to start, but as the match went on, Eddie came back and started to show why he was one the best workers of all time in the business.

Through his WCW years, Eddie never got the push he greatly deserved, but this was going to be his time to shine no matter what.

As the match came to an end and Goldberg made his presence felt, Eddie knew this was going to be his chance to become champion.  The moment Eddie Guerrero climbed to the top rope, it signaled that the “Frog Splash” that he excelled at using was soon to come.

When Eddie left the top rope, it was as if it was in slow motion to most wrestling fans until he landed on top of Lesnar.  Was this it? Was this Eddie’s time to become champion?

As referee Brian Hebner counted to three, the crowd pop was deafening.  The moment Eddie jumped up to celebrate the biggest win of his career, wrestling fans live and all across the world shed tears of joy for Eddie Guerrero.  When Eddie went over to his mother and his brother to have a few special words for only them to hear, wrestling fans went back to a place – a place where wrestling matches like this one shaped their fandom for years to come.

Wrestling matches can make us cry or laugh, or even bring a strong dislike towards a wrestler out of us.  This match was something that brought out all of those emotions and more.

Every time I go back and watch the match I can’t help but get goosebumps going up and down my body.  Bringing tears of joy to the surface of a fairly tough personality shows you the power of professional wrestling and the power of telling a great story in the ring.  Eddie Guerrero did just that during his time on this earth and in this match.