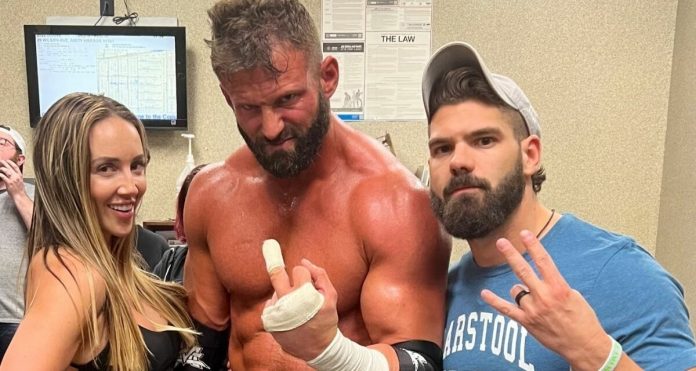 VSK, known for his career on the independent circuit throughout the Northeastern wrestling promotions and now becoming a trainer of today’s top stars, including MJF and Kris Statlander, recently spoke with Wrestling Epicenter to promote NWA Alwayz Ready. Here are the highlights:

On how he and Matt Cardona paired up and he became part of the Cardona Family:
“Well, we’re both Long Island guys. I hate to say “grew up” because it makes us both feel old but I grew up watching his True LI Story online, I followed his (WWE) career closely because he was an inspiration for me being a guy who was from 10, 15 minutes away from my home town and making it to WWE and all the places he’s gone since then. Plus, I’ve been friends with Brian Myers for the past 6 or 7 years. And, if you’re going to hang with Brian, you’re eventually going to cross paths with Matt Cardona! As you said, doing the *Major Wrestling Figure Podcast” stuff, their FWF shows where Matt and I actually wrestled each other in early 2021, From that match, I think that was the genesis of him gaining respect for me and our friendship blooming as it has, helping me get to the NWA, and becoming part of the Cardona family!”

On Billy Corgan’s vision for NWA & NWA Powerrr:
“Going back to what you said, it looks like what would happen if you put on TBS at 6:05 on a Saturday night when we were kids. My first NWA show, I went up to the ring and I looked around and felt like I had gotten in a time machine. It felt very late 1980’s, early 1990’s! I had to pinch myself to make sure this was real and not just a dream! I think it is a good idea! Wrestling is a niche. And, every company in wrestling has to find their own niche. Billy Corgan and the NWA are putting out a little bit of a different product than everything else that is out there right now. The more you can do to distinguish yourself and help you stand out from the herd is only going to help your product.”

On Mike Knox being part of the Cardona Family:
“Mike Knox and I only met the day Matt Cardona won the NWA World Title. The idea of us being paired together was brought to us and it was such a great opportunity, of course we were going to say yes. But, after talking for a while about what we both felt the team could or should be, I think we found out we had a lot more in common than we ever could have hoped. We’ve had 5 or 6 tag matches so far and before the first one, we looked at each other and realized this can become something very special. And, I don’t think we have to restrict this just to the NWA. I’d like to see where else we could go and team up and take over.”

On being the “Prettiest Belle of the Ball” getting to work NWA, AEW, Impact and beyond right now:
“(laughs) I’ve always felt that way, thank you for noticing! Going into 2018, 2019, and 2020 – Not knowing what the year would bring, I had set a goal for myself and that goal was to sign somewhere. But, I’m glad that didn’t pan out like I had thought that it should because as a result of that, I’ve had the opportunity to work for the NWA, Impact Wrestling, and AEW as I just have in the past month span. I got to wrestle for AEW in the same building I watch my favorite NHL Hockey team play, I got to work for Impact Wrestling a couple of hours from my house where people were happy to see me come back, and I’ve gotten to work for the NWA. So, me not being tied down to one place has really actually helped me a lot.”

On being one of the trainers of AEW’s Kris Statlander:
“This is one of my favorite stories to tell and I tell it like a proud Dad! It was Kris’ 3rd or 4th days of training. I was doing a drill with her where she did an over-under. And, as she went over the person under her, she didn’t have the strength in her arms to hold herself up and hit her forehead on the turnbuckle post. Create-A-Pro uses the squared posts, not the round ones and the edges are like cut metal. So, she came over to me and she was bleeding from the face. So, I thought, “Ok, I’m fired! And, she’s going to quit wrestling forever.” She looked at me and said, “Is it OK if I go get a paper towel and try it again?” I was like, “Uh! Ok, this kid clearly has a passion for this and is tough!” And, I’ve literally gotten to watch that grow week by week, month by month, and now year by year. I am very happy to see her succeed and her prove me and everyone else that has believed in her right. She is something very, very special.”

On training MJF and his wild promo from AEW Dynamite last Wednesday;
“Since I met him 6 or so years ago, he’s someone who clearly believes in himself very highly and someone who backs up what he believes. It is tough to argue with him when he says that he is the best and that he’s this money making, ratings drawing, attention getting guy because he is. I’ve not spoken to Max about this. But, I think it is about time he gets the flowers that he deserves. I think, begrudgingly, it is going to be a lot of flowers from a lot of people right now!”

On his Shawn Michaels fandom:
“Right now, I’m sitting in my basement which is lovingly called Hicken’s Bottom. I’ve got one wall that is lined with Shawn Michaels magazines =, another wall with action figures of Shawn Michaels from the AWA all the way to his bald Saudi figure that I had to buy. And, I’m sitting in front of my TV that has 2 Hasbro rings filled with figures and then 2 cases either side, 6 shelves each, all filled with figures. I am still very much a wrestling collector. I just got a figure in the mail today of one Alundra Blayze who is an NWA agent and coach backstage (Madusa) and I’ve just gotten to meet her. So, I’m still very much into collecting.”

On his collections genesis:
“I’m very impressed that you know my Hulk Hogan LJN figure history! (laughs) My dad was actually a big wrestling fan. The Hogan LJN was actually for his own collection. But, as a kid, the LJN and a WrestleMania II program were my first toys that I would smash around as a small child… That WrestleMania II program became a coloring book, unfortunately.”

On his “Holy Grail” in his collection:
“I don’t know if I’d say it is my “Holy Grail” but I got COVID early in 2020 and I bought myself a “I Survived COVID” gift and got the Shawn Michaels AWA REMCO action figure for about $150.”

On his plans for the weekend’s NWA festivities:
“I think Mike Knox and I have something special. I think we would do well to challenge for the NWA World Tag Team Titles. If Mike wants to continue his feud with Trevor Murdoch, I would be very interested in seeing how that NWA Junior Heavyweight Title looks around my waist. And, hey, if Matt Cardona is hurt, maybe I could become the Interim CHampion and defend his title for him!”