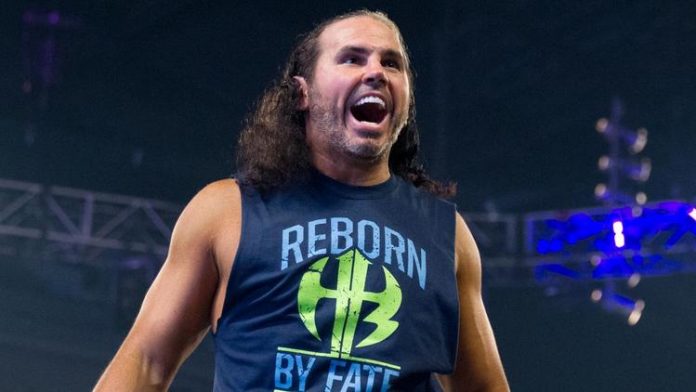 – As noted, RAW Tag Team Champions Cesaro and Sheamus retained over The Hardys in a 30-Minute Iron Man match at WWE Great Balls of Fire last night. Above is video of Matt Hardy receiving 9 stitches to close a head wound backstage after the match.

– WWE has a new poll asking fans if Roman Reigns went too far by reversing the ambulance into the semi-trailer after his Ambulance Match loss to Braun Strowman at Great Balls of Fire. As of this writing, 59% voted, “No, Strowman would have done the same thing to Reigns if he had the chance.” The rest went with, “Yes, Reigns should have kept his cool after his loss.”

– Below is video of WWE Intercontinental Champion The Miz, Maryse, Curtis Axel and Bo Dallas talking to Renee Young and Peter Rosenberg on RAW Talk after Miz retained over Dean Ambrose at Great Balls of Fire last night. Miz says there’s a reason why he recruited Dallas and Axel – because they are real stars and WWE was doing nothing with them.

"There is a reason I have been here for 12 years and have outlasted every single person…" – @mikethemiz #RawTalk #WWEGBOF pic.twitter.com/oFy3xwEEXo