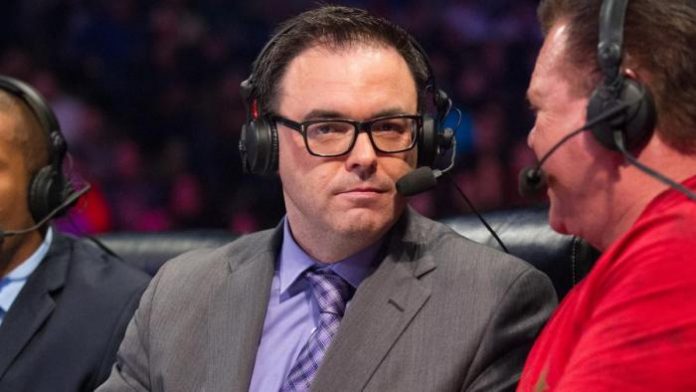 Former WWE SmackDown Mauro Ranallo, who remains under contract with the company until August 12th, has signed with Bellator MMA. They issued the following announcement today:

LOS ANGELES — Bellator has signed longstanding MMA commentators Mike Goldberg and Mauro Ranallo to multi-event broadcast agreements beginning with Bellator NYC: Sonnen vs. Silva and Bellator 180: Davis vs. Bader on Saturday, June 24. The move sees Goldberg return to SPIKE for the first time since 2011, while Ranallo reunites with Bellator President Scott Coker, having worked together through 2013. The pair will join a broadcast team that currently includes Jimmy Smith, Jenn Brown and Chael Sonnen.

“Mike Goldberg and Mauro Ranallo are two of the best in our business and I couldn’t be happier about them joining the Bellator family,” said Scott Coker. “In addition to June 24, we look forward to working together to make future Spike broadcasts even more exciting for our fans as we add further depth to an already-exceptional broadcast team.”

“The addition of highly-regarded announcers Mauro and Mike to our fantastic lineup of broadcasters, and our first-rate production led by Scott Fishman, further demonstrates our commitment MMA fans and expanding the global Bellator brand,” added Spike SVP, Sports and Specials Jon Slusser.

Mike Goldberg is best known for his 20 plus years of play-by-play work in professional MMA and trademark calls that made him popular with fans around the globe. In addition to his two decades in mixed martial arts, he has broadcast every major sport at the network level, most notably his 900 games in the NHL, both nationally and with the Minnesota Wild, Vancouver Canucks and Detroit Red Wings. He has also hosted entertainment shows, including Shaq Vs. A graduate of Miami (Ohio) University, Goldberg now resides in Phoenix, Ariz.

Mauro Ranallo gained notoriety with MMA fans during his tenure with PRIDE, and later STRIKEFORCE, where his voice became synonymous with the now-legendary events. Throughout his career, Ranallo has spent time working with various sports outside of MMA, including boxing, professional wrestling, kickboxing and ice hockey, and will continue his work with Showtime Boxing. Ranallo, a native of British Columbia, Canada, now resides in Los Angeles, Calif.

About Bellator:
Bellator is a leading mixed martial arts and kickboxing organization featuring many of the best fighters in the world. Under the direction of veteran fight promoter Scott Coker, Bellator is available to nearly 500 million homes worldwide in over 140 countries. In the United States, Bellator can be seen on SPIKE, the combat sports television leader. Bellator is comprised of an executive team that includes top industry professionals in television production, live event orchestration, fighter development/relations, venue procurement, sponsorship creation/development, international licensing, marketing, advertising, publicity and commission relations. Bellator is based in Hollywood, Calif. and owned by entertainment giant Viacom, home to the world’s premier entertainment brands that connect with audiences through compelling content across television, motion picture, online and mobile platforms.

About Spike:
Spike is available in 98.7 million homes and is a division of Viacom Media Networks. A unit of Viacom (NASDAQ: VIA, VIAB), Viacom Media Networks is one of the world’s leading creators of programming and content across all media platforms. Spike’s Internet address is www.spike.com and for up-to-the-minute and archival press information and photographs, visit Spike’s press site at http://www.spike.com/press. Follow us on Twitter @spiketvpr for the latest in breaking news updates, behind-the-scenes information and photos.