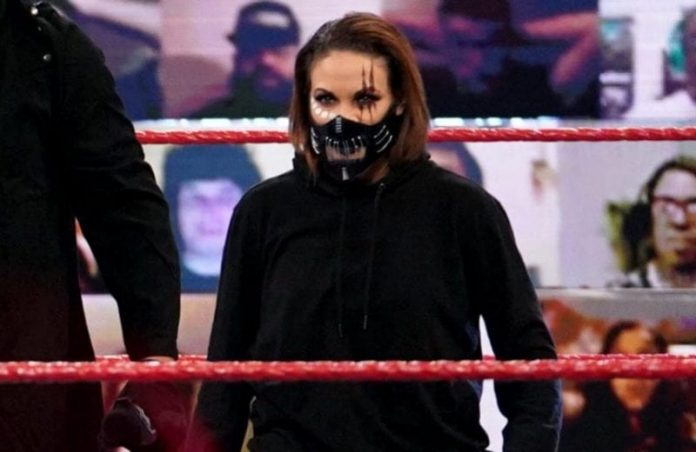 During an interview with Bell To Belles, former WWE star Mercedes Martinez talked about why she ended up leaving the Retribution faction shortly after being introduced as Reckoning:

“We knew we were gonna wear masks but I thought it was more for entrance or for just the aesthetic, you know, just because that’s part of — and that’s fine because I wear a face mask in my entrance, which is perfectly fine. I believe that the facemask, maybe we should have had some input in it. I was like, maybe, ‘Here’s my facemask. I have two different facemasks. Maybe we can make something similar to these two but for this group.’

You know, I tried really hard but I can’t wrestle in this mask and that’s another issue is that I can’t wrestle in a mask. I have asthma, it’s hard for me to breath in the first place without a mask. How am I going to wrestle in a mask? And you know, we’re still in (a) pandemic. For me to train or be in a gym or anything like that, I have to wear a mask and it’s so hard for me to do that-that I built my own home gym for that reason because I can’t breathe, I have to have an inhaler so, that was a safety issue for me.”

“When something doesn’t feel right, regardless of maybe you can be on the main roster, you can make all this money and stuff, at the end of the day, I just didn’t feel it in my heart. It really came down to that. It really just didn’t feel like I should be a part of this group and people think that it’s probably the wrong decision but for me it was the right decision right then and there, for me. Maybe they could’ve gotten somebody else but for me and for the 20 years that I put in-in this business, I didn’t want my WWE career to be valued as part of a group and a name change and everything changed from what people know me as.

I built my legacy on my own and for me, I was like, ‘I don’t have a long shelf life at 40 years old. I don’t know how long I’m gonna be a part of this business’, especially with WWE. I don’t know if they’re gonna keep me around long. I don’t know anything, nothing’s guaranteed in life so do I want my legacy, my WWE stamp to be part of RETRIBUTION? Or do I want my stamp to be known as Mercedes that people know and love and the badass?’ And that’s really what it came down to. It was, ‘I need to be known as Mercedes.’ That’s what they grabbed me as, that is what we got my contract from is ‘Mercedes.’ That is what I want to leave as when it came to WWE.”