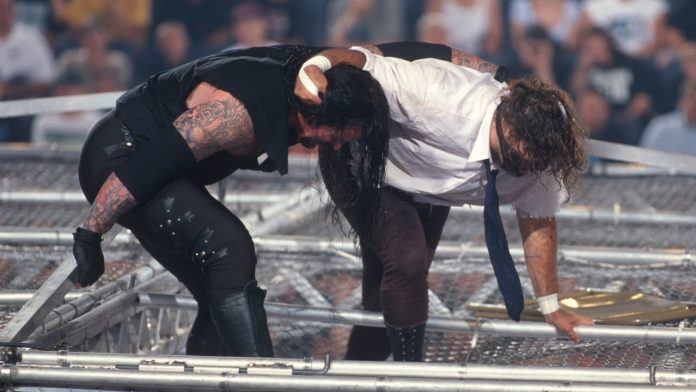 Mick Foley discussed his feelings around his iconic Hell in a Cell match with The Undertaker while speaking with Inside the Ropes.

The match took place at the King of the Ring PPV event in 1998. Here is what he had to say:

On resenting the match for a long time: “I did. I resented being the guy who did the Cell match. It got to the point where I literally felt like Bill Murray in an airing of Groundhog Day that never ends. For 15 years, someone will come up to me at least once a day as if it’s the first time I’d ever been asked, and go, ‘Did it hurt?’ … I disliked being the guy known for that one match because there’s other things I wanted to be known for.”

On people being surprised that he was hurt by his matches: “One time I remember — this wasn’t specific to the cell match, but before I had my hip and knee replaced, I was really struggling to get around. If any of you guys saw my shows — man, I did more sitting at those shows than I did here. I was like, I was pretty much just immobile, it was painful to watch me get around. I remember getting out at like the Jiffy Lube place. And it took me about five minutes to get out of my car and going. And I limped so noticeably, and the guy goes, ‘Yeah, I guess that wrestling really takes its toll on you.’ And I go, ‘Yeah.’ He goes, ‘Did you ever get hurt?’ It’s the stupidest thing I’ve ever heard, after acknowledging that wrestling takes its toll on you.

“And then I was in Kansas City, doing a Q&A like we’re doing tonight, and there’s kind of tough cowboy guy, you know, in the audience. And he doesn’t ask a question, but he wants to the meet-and-greet afterward. He comes up, and I think he did it to protect my image as some kind of tough guy. And he goes, ‘Hey, uh, I noticed when the Undertaker threw you off that cell, that you landed on a table.’ And he leans forward, and he whispers in my ear, ‘It broke your fall, didn’t it?’ And I realized he was onto me! I said, ‘Yeah, it did.’ So he goes, ‘So you didn’t get hurt?’ And I went, ‘Not at all.’ I leaned forward and I whispered in his year, ‘It was a magic table!’”

On rewatching the match after his kids wanted to see it: “I watched that match in its entirety for the first time in many years. Like, we all see the clips. If you have a chance to go back and watch it in its entirety, man. It still packs a wallop, like, it’s heavy. And what I took from it was this incredible dedication to get over the finish line by whatever means it took. And it’s this strange thing. Because obviously things went wrong, didn’t go like we hoped. And you see human beings trying of pick up the pieces, with help from wherever we can get it.”