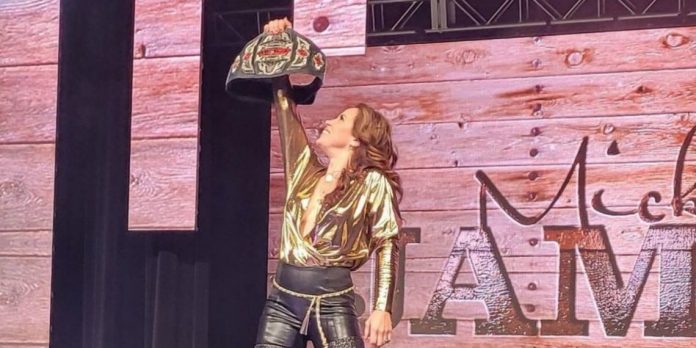 Mickie James made her latest defense as Knockouts Champion against Deonna Purrazzo in a Texas Death Match. This was the main event of the show, which was done due to history.

It happened at Impact Wrestling’s Hard To Kill pay-per-view event on Saturday night from Dallas Texas at the Factory. They used various weapons throughout the match. James got busted open. James hit her DDT finisher to retain.

This was a rematch from the Bound For Glory PPV event where James won the title. It was announced on WWE Friday Night SmackDown that James will compete in this year’s Women’s Royal Rumble match. WWE did acknowledge James as the Knockouts Champion.

Its main event time!@DeonnaPurrazzo vs @MickieJames for the Knockouts World Championship in a Texas Death Match happens NOW!#IMPACTWRESTLING #HardToKill pic.twitter.com/IKR7XUmIzP

Hardcore country is in some hardcore trouble with those thumbtacks to the back.#HardToKill

These women have gone beyond their limits tonight. Who will walk away with the title?#HardToKill

She is going to the 2022 women's #RoyalRumble with the @IMPACTWRESTLING Knockouts Championship in hand!#HardToKill